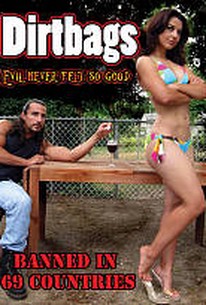 The movie that is known as ""Dirtbags: Evil Never Felt So Good"" which is a re-make of ""Dirtbags: The Armpit of Metal"" is being re-released. This DVD will total over 3 hours. The edit is the same, amounting to a 1 hour and 42 minute movie, but there is also a 41-minute interview with Peter Steele (different than the one on Rap Sucks). There is also a generous helping of behind-the-scenes footage as well as all of the Gaylord footage (the actor had fun with his co-stars, not breaking character).

There are no critic reviews yet for Dirtbags. Keep checking Rotten Tomatoes for updates!

There are no featured reviews for Dirtbags at this time.