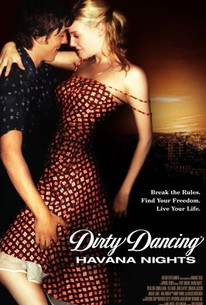 Not a sequel, not really a prequel, sort of a remake, more of a re-imagining, Dirty Dancing: Havana Nights follows the blossoming love affair of young couple Katey (Romola Garai) and Javier (Diego Luna) against the backdrop of the Cuban Revolution in 1958. Katey is an American girl living in Cuba with her parents who meets Javier, a local. Javier takes Katey to a nightclub where he teaches her how to dance dirty Cuban-style. The two grow closer and closer, but when Castro takes over, Katey's parents decide to flee for the U.S., leaving Katey to make the ultimate decision. Tying the film together with the classic 1987 original is Patrick Swayze who reprises the role of Johnny Castle in a cameo.

Debbie Casteñeda
as girl in club

Matt Birman
as Officer in Kitchen

This sweet, sometimes clunky chick flick is a likable teen romance, but not likely to arouse the giddy swoons Patrick Swayze and Jennifer Grey generated back in '87.

The dynamics of Havana Nights haven't the urgency of the first Dirty Dancing.

Pure schmaltz, but not without its share of feel-good entertainment value.

Next to Dirty Dancing: Havana Nights, the first picture is like something out of the golden age of Hollywood.

Tries to add Cuban flavor to a familiar plot but comes up with nothing more than a bubbling stew of cliches.

A horribly routine star-crossed romance job with none of the spunk or humanity that made its oh-so-better forebear a generational classic.

It challenges its audience to ask questions, namely, 'Why?' Why was this movie even made?

Aside from the triteness of the dialogue, the mathematical predictability of the script and the muddling of numbskulled politics, DD: HN is a fairly enjoyable experience.

Although based on choreographer JoAnn Jansen's experience, the script was written by a committee of eight; each writer seems to have contributed every cliché in the memory bank.

It's hardly ever a good idea to remake a beloved movie.

Without any of the spark of the original this second Dirty Dancing film is a giant disappointment to every expectant woman looking forward to the same sex appeal of Swayze we were graced with in the original. Set in revolutionary Cuba, much of the film decided to saturate itself with this plot point, including spicy music, random acts of rebellion, and societal and family tensions within the lower classes of workers who cater to the American residents. As you can guess, this leads to a Romeo and Juliet-esque relationship between prim and proper Katey and working Joe, Javier. The reason the original worked so well was the immersion of the time period with a nostalgic soundtrack, and a love story of abandoning innocence for something much better, freedom finally being found through dance. This film seems to want to explore an entire country's journey towards freedom instead. Garai's character is less developed than the original Baby, and her relationship with her forbidden lover is random. If they hadn't set it where they had, in the time they had, and maybe hadn't even included a love story, it could have successfully worked. Even in the original there wasn't a lot of great choreography, but there were some profound scenes involving Patrick Swayze, who pops up to provide somewhat of a cameo as the dance teacher who teaches Katey about letting her partner get close to her. In this there is no exciting dance scenes, except for a brief peek into a Cuban club, and that's fast glanced over. Besides the fact that this is pure consumer cheese, the music does not set the mood, as it's all from the past ten years. I would have been more understanding if they hadn't tried to sell it as a Dirty Dancing film.

Different story...centred on the dancing aspect. Not bad at all.