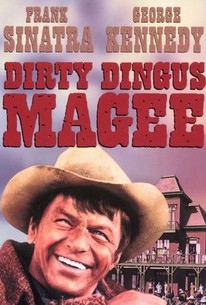 Frank Sinatra headlines this ribald western parody. Ol' Blue Eyes plays the small-taters crook Dingus Macgee who robs a stage, and steals a strong box, only to find himself unable to open it. Meanwhile his bumbling victim hightails it for nearby Yerkey's Hole where he tells the mayor of the theft. The town leader and owner of a thriving local brothel (thanks to the presences of a fortress) appoints the victim the new deputy. Immediately the deputy rides out for revenge. Meanwhile Dingus dallies with a sex-starved Indian maiden who becomes obsessed with him. The deputy rides up during the tryst and arrests Dingus. Later the girl helps him escape from the pokey. But Dingus' problems are far from over. See, the maid wants more lovin', the deputy wants his box back and the local Indians want his scalp for sullying the maiden. Meanwhile the mayor has his own problems when he learns that the soldiers are planning to abandon the fort to go fight at Little Big Horn.

Dirty Dingus Magee is as shabby a piece of goods as has masqueraded as a Western since, oh, A Stranger Returns.

There are no featured audience reviews yet. Click the link below to see what others say about Dirty Dingus Magee!