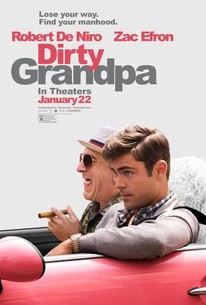 Critics Consensus: Like a Werther's Original dropped down a sewer drain, Dirty Grandpa represents the careless fumbling of a classic talent that once brought pleasure to millions.

Critics Consensus: Like a Werther's Original dropped down a sewer drain, Dirty Grandpa represents the careless fumbling of a classic talent that once brought pleasure to millions.

Critic Consensus: Like a Werther's Original dropped down a sewer drain, Dirty Grandpa represents the careless fumbling of a classic talent that once brought pleasure to millions.

Jason Kelly [Zac Efron] is one week away from marrying his boss's uber-controlling daughter, putting him on the fast track for a partnership at the law firm. However, when the straight-laced Jason is tricked into driving his foul-mouthed grandfather, Dick [Robert De Niro], to Daytona for spring break, his pending nuptials are suddenly in jeopardy. Between riotous frat parties, bar fights, and an epic night of karaoke, Dick is on a quest to live his life to the fullest and bring Jason along for the ride. Ultimately, on the wildest journey of their lives, "dirty" Grandpa and his uptight grandson discover they can learn from one another and form the bond they never had.

Eric Goins
as Father at the Beach

Gavin Munn
as Boy at Beach

Matthew Cornwell
as Father at Wake

Equal parts bad and baffling, it seems to have been written and directed by alien life forms who read YouTube comment sections for a week and drew these conclusions about human behavior.

This is a movie that desperately wants to be a raunchy, politically incorrect, gross-out comedy. It gets as far as desperate.

Its horrible message: the old are only interesting when they're capable of aping the young.

Steer away from Dirty Grandpa, just as you would sidestep a dog turd on the pavement.

Plays like one of those dire mainstream films that - thanks to a few extreme moments - Quentin Tarantino periodically reclaims in his best-of-the-year list.

The premise has potential, but the execution is painfully unfunny.

The kind of film that, one day, De Niro's great-grandchildren will watch and wonder what all the fuss about him was.

Mazer can't decide what kind of film Dirty Grandpa is to be.

De Niro's legacy as an actor will be cemented with ground breaking films like Casino, Raging Bull, Taxi Driver, Goodfellas and Heat - just to name a few. Dirty Grandpa will not.

Dirty Grandpa had potential to be a good gross-out comedy, but it's mostly just gross.

Cathy Brennan
One Room With A View

DIRTY GRANDPA is nothing more than an exercise in wink-and-nudge boorishness that leaves a bad taste in your mouth.

'I haven't had sex in 15 years and I wanna fuck! fuck! fuck! fuck!' 'Oh, so that's what this is all about??' Yes this is what this movie is all about, Robert De Niro's dirty grandpa character who has just lost his wife of 40 years, is now revealed to be a foul mouthed, booze obsessed pervert who wants to fuck young girls. Its up to the young, clean cut and unaware Jason (Efron) to escort him from Georgia to his Florida retirement home. Aaand that's your movie in a nutshell people, sound familiar? Well that's probably because its been done a shitzillion times before. I mean honesty, who thought of this? who greenlit it? The entire concept is so cliche and dated, an old grandfather figure that turns out to be a dirty, loud mouthed, profanity spewing perv who also just happens to be an ex-special forces type so he can also kick ass if needs be. This of course means you're gonna get a sequence where he does indeed kick someone's ass much to the surprise of Jason his grandson. Naturally of course, the fact that grandpa is an ass-kicking, alcohole machine, means that the grandson character must be a total goodie goodie, a real preppy nerd type because its the perfect equal polar opposite matchup. Completely and utterly predictable, cliched, corny and unoriginal, the characters literally lay out the ground plan for the plot without even having to write a single word of dialog for them. And yes you've guessed it, that plot simply revolves around lots and lots and lots of binge drinking at parties, girls in skimpy bikinis, pool parties, beach parties, drinking, drugs, lame pranks, drinking, sex, nudity, drinking, jail time, muscle flexing and plenty of drinking. This is basically the modern frat boy flick minus any originality because frat boy flicks were a staple diet back in the 80's. So this odd pairing drive off on this road trip of sorts in an attempt to reach Florida. God knows how far they actually get because the entire flick is taken up with the duo getting into various parties so grandpa can try and get laid. This is against the wishes of a shocked Jason of course but he usually ends up getting tricked or drugged into it, then winds up enjoying it, then winds up waking up somewhere hungover and naked...or in jail, take your pick. The whole time Jason is also trying to hide all this outrageous behaviour from his very sexy, yet very prudish fiancee and his conservative parents. Anyway all I know is at one point they get to Daytona beach in Florida, no clue how they got there or how far they still had to go, but who cares. Now in all honesty the casting for grandpa Dick with De Niro is pretty good. De Niro is the obviously the perfect age and he has that perfect persona where you're not really sure what he's actually like, he could easily be a dark horse. To that extent De Niro does the job well, as we know he's great at swearing and being tough, he still looks pretty tough, and he fits the rough ex-services persona well also. For all intense and purposes he could easily be playing yet another mobster type in a comedy, he never really swings too far from that schtick. As for Jason played by Efron, well to be honest the guy is too good looking and too muscular for this part. He isn't too bad with his comic timing and everything (surprisingly!), but when it came to sequences like the 'flex-off' on the beach and when he's generally topless, he's way too ripped! That's not a bad thing but I really think to get the right comedic affect they should of cast someone without a good physique, with bad hair, someone who's a bit geeky looking. That would at least be a good opposite to the rest of beach/party going extras who are generally all sexy boys and girls. The fact that Efron is way hotter than all of them kinda makes most of the sexual innuendo gags fall flat. I must point out one character played by some bloke called Jason Mantzoukas. Oh my fucking God this guy was so fucking annoying I could of killed him, literally killed him. Who is this guy? Where did he come from? Why is he being cast in movies? Is he supposed to be a funny guy? Holy shitstains this guy was dreadful, completely unfunny, everything just fell flat or totally missed the target by miles. His whole drug obsession spiel was just so fucking cliched, so old, so not funny! Yeah its so cool and amusing to do drugs or pretend to do drugs ha-ha-ha! Jesus Christ I was giggling at shit like this when I was a kid back in the mid 80's. Then you have the two corrupt cops, one male and one female, played by whoever, I don't care. Once again, completely not funny, not even close, just cringeworthy on every level, literally amateurish. Yeah so bottom line, this is a piece of shit, an unfunny piece of modern day movie garbage. Not even De Niro or Efron's perfectly tanned torso can save this, its dribble of epic proportions with not a laugh in sight. That is of course...the thought of seeing De Niro's cock in Efron's face sounds good to you? Or 72 year old De Niro's character having sex with a supposed 20 something college student (Lenore) and then having a kid together (making Efron's character the uncle to his grandfathers newborn son and a college slut his new grandmother). Oh and then there's the real classy dialog between grandpa Dick and Lenore...[i]'You're gonna tsunami on my face'[/i], [i]'You're gonna flood like the Nile'[/i], Nice.

This movie is not the monumental disaster that the average critical consensus is making out to look like. It does have a few laughs here and there, as unoriginal and refined as they may be. Having said all that, it's still not a movie I'd recommend. To put it in simpler terms: it's not a good sign when every actor in the movie, and I literally mean every actor, has been in at least one other, better movie. Bright side, Zac Efron got to work with Deniro, so at least someone got his time's worth. Like they say, "One for the fans, one for you".

Decent buddy comedy that pairs DeNiro and Efron. Yes, they step over the line quite frequently (and you might wonder how DeNiro got involved) but the two manage chemistry together and stepping over the line is one of the staples of comedy. There are many gay and butt jokes. Some off color racial stuff. If there's anything to question it's what has happened to our society that this is what the pros believe the public wants to see: DeNiro grinding on a much younger woman. The stars are brave and up for the challenge. They'll do anything for a laugh. My hat's off to Efron for what he goes through. It's a decent comedy, but you'll be shaking your head "no, no, no" throughout.

"Dirty Grandpa" boasts one great thing, and one great thing only. The chemistry between Robert DeNiro and Zac Efron is much better than I was expecting it to be, and I really bought into their troubled relationship which each other. On the verge of marriage, Jason Kelly (Efron) and his Grandfather set out on a trip to Florida once his wife passes away. At it's core, this film is here to explore these characters emotionally as the audience watches them take their wacky trip. Self discovery and choosing what is right and wrong in life is what the message is here, and whether or not I bought into that is another story. I admired the attempt at something heartfelt, but when all of your humour is raunchy dialogue and visuals, it is hard to take a moment to enjoy the nice moments. "Dirty Grandpa" tries way too hard to impress it's target audience, and becomes a sloppily made comedy that really is not all that funny. In the end, I admired the attempt, but the execution was a little much for my taste. It really is a shame, because I love this cast, but they were not given enough to do. I did not hate sitting in the theatre watching this, but was it really worth the time? Sadly no.