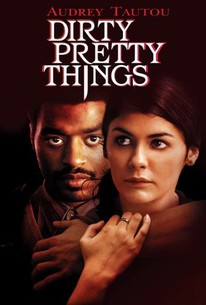 Critics Consensus: An illuminating and nuanced film about the exploitation of illegal immigrants.

Critics Consensus: An illuminating and nuanced film about the exploitation of illegal immigrants.

Critic Consensus: An illuminating and nuanced film about the exploitation of illegal immigrants.

Okwe, a kind-hearted Nigerian doctor, and Senay, a Turkish chambermaid, work at the same West London hotel. The hotel is run by Senor "Sneaky" and is the sort of place where "dirty business" like drug dealing and prostitution takes place. However, when Okwe finds a human heart in one of the toilets, he uncovers something far more sinister than just a common crime.

Adrian Scarborough
as The Doctor
View All

An intelligent and extremely well-made romantic drama that tells an intriguing story with economy and insight.

An impressive mix of entertainment and social comment, spinning a great mystery even as it confronts an ugly world.

A sympathetic, engaging and politically astute slice of modern urban realism, set in the twilight world of London's community of recent immigrants and asylum seekers, and directed with Frears' habitual professionalism and sensitivity.

With his new film, the 2002 Toronto Film Fest favorite Dirty Pretty Things, Frears returns to the realm of the dark and twisted with gutsy aplomb.

A fascinating sight to behold.

A suspenseful, often funny, completely disturbing thriller, Dirty Pretty Things is a gripping film right out of the gate.

Although Steve Knight's Oscar-nominated script gets a bit on the nose discussing those who pretty that which we dirty, it tells a compelling tale of perseverance, with a final sound effect like hope gaining altitude.

Here he strikes a perfect balance between social commentary and melodrama, while nudging his actors to turn potentially stereotypical figures (eg, a virginal waif, a golden-hearted whore, a philosophical Chinese) into three-dimensional people.

Dirty Pretty Things benefits from the best script...hands down, written for a movie released in 2003

Offers a frills-free meditation on the many faces of oppression.

It's involving, well-directed and well-acted.

Another one of those excellent movies that got by me when they first came out. Chiwetel Ejifor plays an excellent part and his acting is way under rated. Film is about illegal immigrants in London and what they have to do in order to live. Okwe was a doctor back in Africa and is now a cab driver and hotel clerk who everyone comes to for help. The hotel owner is moving body parts he takes immigrants and provides them with false papers for a body part. 5 stars

A very nice multicultural movie without the United Colors of Benetton feel. It's not about colors; it's about immigrants, stuck between two or more cultures, making a connection. Chiwetel Ejiofor is quite magnetic as the conflicted doctor, now relegated to odd jobs at a hotel and chauffeur business. The scene in which he's questioned by the immigration agents looking for Senay is an excellent showcase of a strong actor playing weak - much like Al Pacino in ...And Justice For All . I wasn't terribly impressed with Audrey Tautou surprisingly. I don't know if her Turkish accent is all that believable or consistent; nor do I think she and Ejiofor create any chemistry. They seem like good friends, and that's why the "I love you" ending threw me off. There's one pretty big hole in the script though. Okwe finding a healthy, human heart lodged in the toilet is the inciting incident that propels the dramatic question of the film. However, if a patient died on the table at the hands of an incompetent surgeon in the hotel's underground kidney ring, why would the surgeon cut open his chest, take out the heart, and flush it down the toilet? Also, doesn't a bare-shouldered Audrey Tautou on the movie poster make this movie seem like an erotic thriller? Spoiler Alert: it's not.

"So Fucked Up" highlight: the whole plot