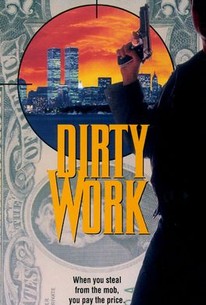 In this made-for-cable movie, a bail bondsman (John Ashton) deals drugs on the side and thinks he's struck it rich when he conceives a scheme to steal counterfeit money. When the mob comes calling for it, he tries to set up a fellow employee (Kevin Dobson) as the culprit.

Mitchell Ryan
as Esposito
View All

The story's old hat-or next door to it-and the characters are scarcely new. But director John McPherson brings off an involving, often energetic, variation on early crime films.

There are no featured reviews for Dirty Work at this time.