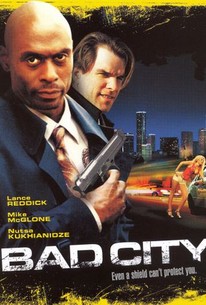 Lance Reddick, Mike McGlone, Nutsa Kukhianidze and Austin Pendleton co-star in the action-riddled urban thriller Bad City, which made its (extremely limited) U.S. theatrical debut in February 2006. The complex premise involves a murder investigation that unfolds after two seemingly unrelated society women turn up dismembered: a mafioso's (Pendleton) mistress, and the wife of a state attorney candidate played by Reddick (of television's Oz). Local authorities infer that a psychopathic serial killer holds responsibility, until leads point, oddly, to two individuals - a unique figure in each case. Kukhianidze portrays a Polish emigrant who moves into a hotel and falls under the thumb of Pendleton's predatory crime boss, Julian Healy. Newcomer Bruce Terris directs, from a mazelike script he co-authored with Rick Rose.

Karin Anglin
as Kylie
View All

There are no critic reviews yet for Dirty Work. Keep checking Rotten Tomatoes for updates!

There are no featured audience reviews yet. Click the link below to see what others say about Dirty Work!