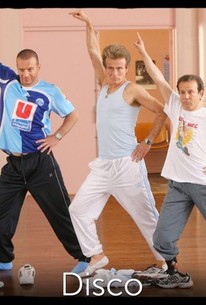 A guy who used to be the king of the dance floor tries to regain his title thirty years after the fact in this French comedy. In the mid-Seventies, Didier (Franck Dubosc) was a disco dancer who made the rounds of all the hottest nightspots in Le Havre with his pals Walter (Samuel Le Bihan) and Neuneuil (Abbes Zahmani), who performed as a trio called the Bee Kings. But in 2007, no one is calling Didier by his nickname "Travolta" anymore; he's out of shape, out of work, living with his mother, and trying to raise enough money to visit his son, who lives in Australia with his mom. Jean-François (Gerard Depardieu), a longtime friend of Didier who runs a local night club, the Gin Fizz, is holding a Seventies dance contest, and the prize money would be enough to pay for a trip to Australia. Didier figures this is his best bet to get the cash to see his son, and persuades Walter and Neuneuil to reform the Bee Kings and show the youngsters how it's done. But the former disco dandies realize they're very much out of practice, and they take some refresher lessons with France (Emmanuelle Beart), who spends more time teaching ballet to ten-year-olds than hitting the clubs these days. Disco includes a score of classic disco hits, featuring the Jacksons, Gloria Gaynor, Cerrone and Tina Charles.

There are no critic reviews yet for Disco. Keep checking Rotten Tomatoes for updates!

There are no featured reviews for Disco at this time.