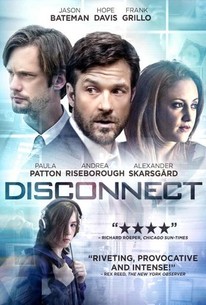 Critics Consensus: It's didactic in spots and melodramatic in others, but Disconnect's strong cast helps make it a timely, effective exploration of modern society's technological overload.

Critics Consensus: It's didactic in spots and melodramatic in others, but Disconnect's strong cast helps make it a timely, effective exploration of modern society's technological overload.

Critic Consensus: It's didactic in spots and melodramatic in others, but Disconnect's strong cast helps make it a timely, effective exploration of modern society's technological overload.

Murderball director Henry Alex Rubin explores the destructive potential of the internet in this ensemble drama starring Jason Bateman, Hope Davis, and Alexander Skarsgård. His marriage dissolving before his very eyes, a former Marine (Skarsgård) ruins his credit by gambling online as his wife (Paula Patton) strikes up an intimate relationship on a popular social networking site. When identity theft puts their life savings at risk, the couple tracks down the man (Michael Nyqvust) they believe is responsible for the crime. Meanwhile, an introverted teenage goth (Jonah Bobo) becomes the victim of a humiliating prank when his two biggest tormentors pose as the girl he likes, trick him into exposing his true identity online. When the prank leads to tragedy, the young victim's mother (Davis) is overwhelmed by grief as her husband (Bateman) explodes with rage. Later, an ambitious TV reporter's quest to expose an online prostitution racket has unexpected repercussions for the frightened young man at the center of the growing controversy. ~ Jason Buchanan, Rovi

Ryder Gering
as Drive by Bully #1

Andrew Seddon
as Drive by Bully #2

Digital Multiplex: This Is the End, The Croods, and More
Critics Consensus: 42 Is Earnest and Inspirational
Video Interviews with Disconnect cast: Jason Bateman, Alexander Skarsgard, Paula Patton, and Max Thieriot

Disconnect turns out to have a complicated view of life in the digital age. Rising to scenes of real intimacy and insight, the movie is stimulating, and, at times, touching.

Come on, guys: There's nothing cinematic about Googling.

Handsomely shot and judiciously edited, the film benefits from a superlative cast ...

It's left to the actors to make up for the gaffes, and they're definitely up to the task.

Even in the heightened awareness of a post- age (and its ), Disconnect is naturally gripping.

Disconnect has suspense, grace and ultimately a sense of connection, all of which make it worth seeing.

Disconnect offers an important message... But it's not the full story of the power of the Internet.

If vignettes merely support a thesis, the audience is disinclined to care about the people in them. Instead of being entertained, we're lectured to. Who wants that?

Disconnect succeeds most when it's pulling at the heartstrings.

Austin Trunick
Under the Radar
View All Critic Reviews (79)

I felt that while the film covered very pertinent issues that have never really well-portrayed on film before, the script fell a bit short in developing these characters or perhaps the ending. Either way, the performances here are top-notch.

Could have been worse (I get the comparisons with 'Crash' but it doesn't deserve that!) but could have been so much better (slight when compared with Magnolia) but it's still a lot of fun and rewarding enough to come back to... just not quite as thought-provoking as they would have us believe

Good movie. A definite example of how movies whose stories intertwine SHOULD be done. And, if you have kids who are social media junkies, it is a must see. Jason Bateman was especially good in a rare dramatic role. Not your typical cookie cutter happy ending. Definitely a movie people should see in today's age of technology, where everyone seems to be on a cell phone, ipad, etc. Stellar job done by all.

The Dark side of Online. Very Good Film! This is a powerful and provocative film that not only keeps you pinned to your seat but also makes you think about the consequences of your actions. It should certainly be required viewing not only for young people but also for anyone who uses social media or communicates via the Internet. Disconnect mainly centers on three sub stories which are loosely linked. There was nothing wrong in each character's internal logic or perception of the world: a lonely teenager looking for friendship, a wife confiding to a stranger on the internet because her husband cannot talk with her on their loss of their son, a young journalist trying to get a scoop on runaway youth turned cyber sex provider. The characters are not lovable but you cannot help but feel sorry for them and keep asking what went wrong. It also makes us reflect what we need to do, as parents, as classmate, as a regular net shopper to be really connected with people we care amid this overflow of information technology. Just turn off your computer, drop your mobile, and go see it. A hard-working lawyer, attached to his cell phone, can't find the time to communicate with his family. A couple is drawn into a dangerous situation when their secrets are exposed online. A widowed ex-cop struggles to raise a mischievous son who cyber-bullies a classmate. An ambitious journalist sees a career-making story in a teen that performs on an adult-only site. They are strangers, neighbors and colleagues and their stories collide in this riveting dramatic thriller about ordinary people struggling to connect in today's wired world.