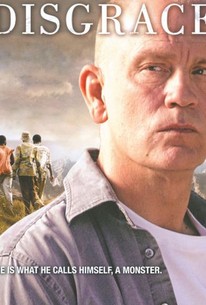 Set in Cape Town, a twice-divorced literature professor retreats to his daughter's farm after having an impulsive affair with a student.

Charles Tertiens
as Ryan
View All

It's an enormously complicated story with great potential for reductive schmaltz, but this is avoided thanks to Anna Maria Monticelli's sharp, sensitive screenplay and superb performances.

It's hard to say what this solid but unadventurous film adds to Coetzee's powerful source material.

A worthwhile film which is concerned to do the right thing by a modern classic.

It's a faithful adaptation, but one that's been indifferently shot by director Steve Jacobs, whose blunt technique tends to flatten the book's morose charge. Still, the acting is often excellent.

This disquieting drama serves as a platform for Malkovich, whose eloquent performance draws you in with great compassion.

It is Lurie's white privilege that is most disturbing...

The Nobel Prize laureate's cutting novel of sex and power in post-apartheid South Africa has been brought to the big screen with all of the loneliness and most of the intelligence of the novel intact.

Steve Jacobs' adaptation of J.M. Coetzee's Booker Prize-winning novel Disgrace fearlessly pares back the layers of post-Apartheid South Africa within the microcosm of a father/daughter relationship.

If you know the novel, you're likely to feel that something has been lost here; if you don't, you still have the film's monotonous pacing to contend with. Still, Jacobs has directed an intelligent, intriguing drama.

This chilly film gets surprisingly close to the tone of Coetzee's precise prose.

A perfectly cast John Malkovich gives a superb performance in a powerful and intelligent study of a man coming back from the brink.

What is so fantastic about this powerful, thought-provoking drama is not only the remarkably intelligent way that it raises many questions about good, evil, morality and amorality, but also that it can be incredibly tense, gripping and unpredictable.

In Cape Town, a professor who was fired for screwing a student retreats to his daughter's ranch where they encounter provincial politics and a gang of rapist thieves. This is an extraordinary film. The plot, drenched with post-colonial themes that expose the racism inherent in apartheid, unfolds deftly, and the characters are all compelling, drawn finely and with an uncomfortable realism. The performances are all great, especially by John Malkovich. The scenes between David and Petrus are always rich with subtext. The film's message - even though it's too complex to be reduced to a simple moral - draws a comparison between the Lucy's rape and what white colonialists have done to the country. Additionally, the white characters are in and of themselves victims to their own greedy system. Malkovich, as I've said, is amazing in this film, and I think he can do anything, but he can't do an accent - the one flaw of his work in this film. Overall, Disgrace is simply great, especially for those of you interested in post-colonial theory.

When an middle-aged University professor is asked to leave after an affair with a student he turns to his adult daughter, a South-African farmer. Of course he doesn't find peace on the countryside. His encounter with violence and racism out in the fields shakes his beliefs, but does it change him? Malkovich is perfect, of course, in the role. But the film feels without a clear direction at times, doesn't quite seem to know where it is getting at. In the end, there is no solution, just hints of one. The setting does add a very special atmosphere to the film, though and makes it worth seeing after all.

In the first third of the film Disgrace, it seems obvious to whom and what the title refers, but once Malkovich leaves his university position in Cape Town to visit his daughter on the outskirts of a rural community, the film offers a much deeper story, made all the more poignant by the several references to Lord Byron (and if you've no backround on Byron, then most of the subtext of what goes on here will be lost on you). Malkovich is perfectly cast as a College Professor of poetry, teaching in South Africa. He reveres Byron and uses a lot of Byron's text to justify his own self centered hedonism. He is a fatalist when the hammer finally falls (again harkening to parellells with Byron), and now at loose ends, decides to obstensively move in with his daughter. Once there he is confronted with the natural backlash of the end of apartheid (let's just call it reverse discrimination) - which some might call justified, or.. ahem, poetic justice - but really arpartheid was a disgrace, and the aftermath just as disgracefull - not the rosy "we are the world" that has been painted so often. The film moves at a very pedestrian pace, which gives one much time to ruminate and consider all kinds of topics - from discrimination on both sides of the coin, to the very real sense of Malkovich being a fish out of water - a highly educated man now living in a world where deepseated anger and might makes right rules the day. The kind of society that the western world is comfortable with crashes head long into a form of anarchy in South Africa, and how all sides deal with this is yet another subtext in the film. As Malkovich struggles, not only with himself, but with what is happening around him, the film, in my opinion, makes a couple of missteps. For all his intellectual insistance that he is a blameless for what society perceives to be his transgressions, he finally apologizes to the family he allegedly has harmed. To me this played false, more of an allegory referencing the bigger picture (apartheid) - unless Malkovich's beliefs were more shaken by the events around him than the film would lead you to believe. Further, after his mea culpa, he returns back to his daughter (who had banished him for reasons I won't get into) - a seemingly humbled man who has lost his self and seems willing to become a stone under the wheel. There is a very telling scene, shortly before the ending in which Malkovich seemingly is offered salvation - in the form of a dog who, as dogs do, offers unconditional love and fealty. A sane man, in a sane world, would have accepted the offer and taken the dog in - but Malkovich's world and his self have been torn asunder, so he abandons the animal - in effect also abandoning his self. Pretty deep stuff - and from what I hear, the source novel is awesome. I just wish the film's pacing was a bit sturdier and some better decisions were made in regards to certain scenes.