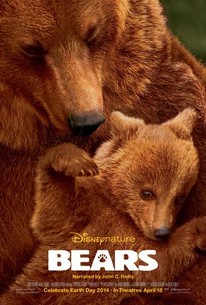 In an epic story of breathtaking scale, Disneynature's new True Life Adventure "Bears" showcases a year in the life of a bear family as two impressionable young cubs are taught life's most important lessons. Set against a majestic Alaskan backdrop teeming with life, their journey begins as winter comes to an end and the bears emerge from hibernation to face the bitter cold. The world outside is exciting-but risky-as the cubs' playful descent down the mountain carries with it a looming threat of avalanches. As the season changes from spring to summer, the brown bears must work hard to find food-ultimately feasting at a plentiful salmon run-while staying safe from rival male bears and predators, including an ever-present wolf pack. "Bears" captures the fast-moving action and suspense of life in one of the planet's last great wildernesses-Alaska! Directed by Alastair Fothergill ("Earth," "African Cats" and "Chimpanzee") and Keith Scholey ("African Cats"), "Bears" arrives in theaters April 18, 2014, to celebrate Earth Day.(c) Disney

"Bears" could have used a lot more science; more substantive information in the place of wacky one-liners. Still, the images trump everything.

Bonus points for all but eliminating the easy scatological humor. Does a bear (poop) in the woods? You won't find out watching "Bears."

There are grittier nature documentaries out there, but "Bears" is simple and effective, and delivered with that friendly Disney touch. Its intent is to make you say, "awww," and it does its job well.

All this is heartwarming, in a bloody, ursine-centric way.

Despite the bracing beauty of the wilderness, and the respite provided by cubs at play, the movie is primarily a sobering treatise on survival.

The simple truth is that much of Bears feels cartoonish and far too light.

It's so magical to watch Disney blend nature and storytelling together in an epic adventure.

Most of the movie is just bears being super cute.

Overall, Bears holds a crossover appeal that should provide legitimate entertainment for the whole family. It's a fantastic documentary of the beautiful world we live in and some of the incredible creatures that live in it.

I'm not suggesting that every nature film narrator should sound like David Attenborough, but John C. Reilly really seems an odd choice.

Charming and awe-inspiring, Disneynature continues it's streak of beautifully filmed nature documentaries with this adorable and pleasant look at the lives of a family of three bears. Rating: 82

I never really know how much to say about these Disneynature films. They are not insufficient enough to call them mild distractions, as the footage is generally great, the voiceovers are fun, and there is enough work done to build a narrative that I can get behind what they have to offer. It generally amounts to having a chance to see animals that kids generally grow up being intrigued by and having a new perspective that can be formed by families, in regards to those animals. African Cats worked for me, as it was neat to see a big screen documentary about lions, with the bonus addition of Samuel L. Jackson providing narration. That film also worked due to the stakes that, manufactured or not, presented a real life depiction of what lions go through. Bears finds a way to create similar stakes, which makes the film effective enough in what ultimately amounts to a large format way to see bears in action. read the whole review at thecodeiszeek.com