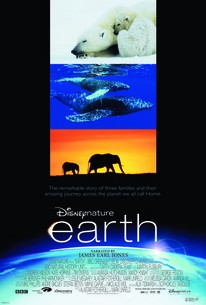 Critics Consensus: With its spectacular and extensive footage, Earth is both informative and entertaining.

Critics Consensus: With its spectacular and extensive footage, Earth is both informative and entertaining.

Critic Consensus: With its spectacular and extensive footage, Earth is both informative and entertaining.

In celebration of Earth Day 2009, Walt Disney Studios' new Disneynature banner makes its official debut with this feature-length nature documentary from award-winning British producer/director Alastair Fothergill (Planet Earth and The Blue Planet). Acclaimed actor James Earl Jones narrates a breathtaking documentary that draws the world's top cinematographers together in order to offer a breathtaking look at the world we live in.

James Earl Jones
as Narrator (US)

Solid docu about global-warming informs rather than preaches.

Earth may be the most striking collection of nature photography I've ever seen. It isn't flawless, but it is a one-of-a-kind treat.

I give directors Alastair Fothergill and Mark Linfield huge props for being able to so concisely whittle down their massive 11-episode magnum opus into such a delightfully entertaining and visually stimulating streamlined version.

For most of the way this is an eye-popping, not blood-curdling, experience.

For a round-the-world trip, it feels a bit like a budget bus tour.

[The directors] know how to craft a sequence (lions and elephants uneasily drinking at the same water hole), have an eye for the telling shot (baboons mincing across a flood plain), and mercifully avoid making the fauna look human.

It is impossible to leave the theater without a deeper appreciation for the world in which we live.

If you don't require a plot and just like seeing all these animals and learning about them than you'll enjoy it.

Disney has a lot to answer for, but its worst sin may be one of its oldest -- anthropomorphizing nature.

It's impossible to not come away with a renewed respect, appreciation and awe for this place we all call home.

When Disney gets involved in making things green, we're talking about the color of money.

Earth hits all the right notes, and if Disney corners the market on nature documentaries and creates an annual cinematic event of this caliber tied into Earth Day, so be it.

In it's defense the TV series this was culled from is entertaining and informative but cut down into 90 mintues makes for a vague, confusing documentary.

Undeniably beautiful and soothing but a bit too preachy and pretentious to really leave a huge impact.

This documentary was shot over four years in countless locations and combines the best nature and animal photography you have ever seen to a very powerful film. Not only is it sweet and funny, but also breathtakingly beautiful, cruel and true, just like nature. Some of the scenes, like the paradise birds or the wading monkeys, are so jaw-droppingly new and amazing that you can't help but rub your eyes. The very fitting and lovely soundtrack plays a big part in creating a unique atmosphere, as well. The commentary states interesting facts every once in a while, but never annoys with too much information or by stating the obvious. While the final message of showing more care for the environment and nature is not presented very subtly it is still a valid one to make. Considering the beautiful images of landscapes and animals you followed for 90 minutes at that point, it would take a fool not to agree. As far as nature documentaries go, this is by far the most impressive film I have ever seen.