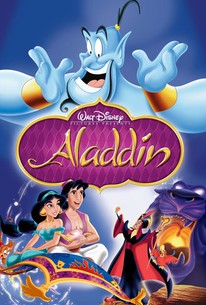 Critics Consensus: A highly entertaining entry in Disney's renaissance era," Aladdin is beautifully drawn, with near-classic songs and a cast of scene-stealing characters.

Critics Consensus: A highly entertaining entry in Disney's renaissance era," Aladdin is beautifully drawn, with near-classic songs and a cast of scene-stealing characters.

Critic Consensus: A highly entertaining entry in Disney's renaissance era," Aladdin is beautifully drawn, with near-classic songs and a cast of scene-stealing characters.

Robin Williams's dizzying and hilarious voicing of the Genie is the main attraction of Aladdin, the third in the series of modern Disney animated movies that began with 1989's The Little Mermaid and heralded a new age for the genre. After a sultan (Douglas Seale) gives his daughter, Jasmine (Linda Larkin), three days to find a husband, she escapes the palace and encounters the street-savvy urchin Aladdin (Scott Weinger), who charms his way into her heart. While the sultan's Vizier, Jafar (Jonathan Freeman), weaves a spell so that he may marry Jasmine and become sultan himself, Aladdin discovers the Genie's lamp in a cave, rubs it, and sets the mystical entity free, leading the Genie to pledge his undying loyalty to the dazzled youth. Aladdin begins his quest to defeat Jafar and win the hand of the princess, with the Genie's help. Monsters, Disney's trademark talking animals, and a flying carpet all figure into the ensuing adventures, but Williams' Genie, who can change into anything or anybody, steals the show as he launches into one crazed monologue after another, impersonating figures from Ed Sullivan to Elvis Presley. ~ Don Kaye, Rovi

The magical, the mystical, the mysterious -- all those powers that lurk within movies but are rarely tapped are unleashed in Disney's latest magnificent animation, Aladdin.

Aladdin is a film of wonders. To see it is to be the smallest child, open-mouthed at the screen's sense of magic, as well as the most knowing adult, eager to laugh at some surprisingly sly humor.

What makes this animated feature such intense, giddy fun is the eruption of uninhibited parody that Robin Williams provides as the voice of the Genie in Aladdin's lamp.

Aladdin is a marvel of the cartoonist's art.

Forget about the lamp. Aladdin is all anyone could wish for in holiday entertainment.

The entire production is one of collaborative innovation and ingenious filmmaking choices.

Behind the mask of animation, Williams has discovered a limitless stage for stand-up comedy.

Williams' never-ending stream of impersonations and wacky characters are so consistently hilarious that the audience barely has time to breathe between belly laughs.

It's the supporting roster that makes the movie.

Aladdin is essentially two love stories in one, Aladdin and Jasmine get the riding off into the sunset / final kiss image but Aladdin and the Genie's love story is the emotional climax. It's so sweet.

This is worth watching for Robin Williams doing the voice of the genie alone, very funny!

It is delightful, the songs are wonderful and the acting is good - despite Williams going too far occasionally with his buffoonery and making it a one-man show -, but there is not much besides that (especially in terms of narrative) to raise it to the level of the studio's best works.

Disney's Aladdin is dazzling, perilous and full of enticing entertainment for the family. The animated classic's loving characters (including a flawless Robin Williams-voice-over performance) infectious musical numbers and Disney delight assures its credibility as one of the studio's best and most memorable. 4.5/5

While it is overly simplistic both emotionally and plotwise -- even for a Disney movie -- Aladdin rises on the strength of its music, as well as its supporting cast (significantly Robin Williams) who make up for the main character's blandness and add a live-wire energy that remains unparalleled in animation.