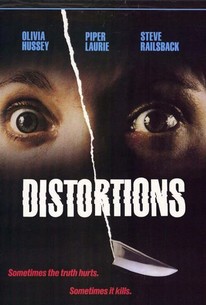 Amy (Olivia Hussey) is a widow who is held captive by her insane Aunt Margot (Piper Laurie) in this predictably routine mystery. After she believes her husband has died, Amy is comforted by a group of society women with lesbian tendencies and is drugged when she goes to live with her aunt who tries to convince her she is insane. Amy begins to have nightmarish hallucinations and believes she sees the decayed remains of her late husband.

There are no critic reviews yet for Distortions. Keep checking Rotten Tomatoes for updates!

There are no featured reviews for Distortions at this time.