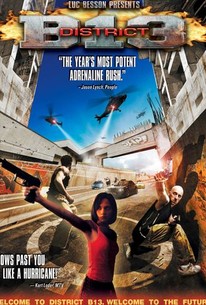 A nuclear weapon has been stolen by the most powerful gang in Paris' treacherous, walled-in ghetto, and it's up to a determined cop and a vigilante criminal in search of his sister to infiltrate the sector, save the girl, and get the bomb out of the bad guys' hands in an action-packed tale produced by Luc Besson and directed by cinematographer Pierre Morel. The year is 2010, and a massive wall has been erected to keep the violence of the Paris ghetto confined to District B13. Within these walls, gangs rules the streets and law enforcement is powerless. This time the gangs have gone too far, though, and when the authorities realize that a nuclear weapon has been smuggled into the district, specially trained policeman and martial artist Damien is assigned the task of retrieving the weapon of mass destruction before Paris goes up in flames. He's not going to be able to do it on his own, though, and when Damien learns that breakaway bad guy Leïto's sister has been abducted by the very same gang, the pair soon forges a tentative partnership that merges the power of law enforcement with the anything-goes attitude of the criminal element. ~ Jason Buchanan, Rovi

Critic Reviews for District B13 (Banlieue 13)

I was delighted by the balletic and acrobatic stunts, some of which evoke Tarzan.

A 90-minute feature simply showing [David] Belle's stunts with no frills would be great; unfortunately, they only account for about 10 minutes - the rest of the time, Belle is called upon to act.

The cast hurls itself into the comic-book violence, while the stunt choreography and razor-sharp editing are exhilarating.

As 85-minute testosterone binges go, you could do a whole lot worse.

By returning to true action instead of CGI gimmicks or fake stunts, Morel has crafted a film that is electrifying to watch.

Urban ills are pretty much the same worldwide. But it's the very Frenchness of the film that makes it amusant. Unlike a typical American actioner, the villain is not a megalomaniacal genius, nor a corporate overlord; it's the civil servants. . .

The straight-faced outrageousness is part of the film's charm, while the stripped down aesthetic, driving pace, and impressive action sequences are the film's charge.

When Belle is in motion, the movie excels.

This action film from Luc Besson's B-movie factory is one of his best.

Comes off more like a theme park show than an actual film, it's there to deliver stunts and never an actual story.

Audience Reviews for District B13 (Banlieue 13)

It's great over the top fun. A smart, funny and highly entertaining film packed with incredible wall to wall action. Ong Bak meets Escape from New York. An unstoppable thrill ride that delivers the goods and incredible aerobic stunts. Its a head bashing good time. It's fast, furious and spectacular entertainment. It's loaded with great chases, awesome fight sequences and terrific gun battles. Director, Pierre Morel and Writer/Producer, Luc Besson bring a tremendously exciting and new breed of action film. David Belle and Cyril Raffaelli bring on great chemistry as well as their incredible skills in martial arts and parkour. An 85 minute, testosterone-injected roller-coaster ride that's one of the most visually memorable action films in years.

Pierre Morel gets District B13 in, over, and around the block.

Everything about this film is quick. The pacing of the story feels the need to sprint to the finish, yet it easy enough to follow. The dialogue is straight to the point and hastily executed. Do the math and it all leads to a brief run time of 70 minutes. Talk about short and sweet.

The action relies heavily on parkour and the introduction for each of the protagonists deliver some highly amusing pieces. The stunts are solid and the sequences are fast-paced with little in the way of slow motion. The fighting is also stylized with some parkour elements thrown in.

David Belle and Cyril Raffaelli are all over the place, while Dany Verissimo provides some much needed girl power on screen. Bibi Naceri and Tony D'Amario are your typical drug gangsters.

There really isn't much to District B13, but as a quick action adventure, it delivers.

A crime riddled district of Paris is walled up and abandoned by the authorities, but when a neutron bomb is stolen by its crime boss, a lone cop is sent in to defuse it. Escape From New York meets Ong Bak in this frenetic French action flick that's very much in the tradition of Luc Besson. The whole "near future" premise is really just an excuse to make you swallow the greater implausibilites in the plot, as there's little here to mark it out as sci-fi. It's really just a series of high octane shoot outs and bone crunching fight sequences as a buddy duo join forces to reach their respective objectives; the bomb and the rescue of a resident's sister. Thankfully there's no corny love interest and the buddy partnership works quite well because of the lack of idiotic one liners and macho bullshit you'd get in a Hollywood equivalent. It's a total no-brainer and the plot gets thinner and thinner as it goes (the best sequences are all at the beginning, before they set out on their mission) but the boys will enjoy the male bonding and non stop action and the girls will enjoy the sight of a constantly shirtless David Belle. Dumb but fun.