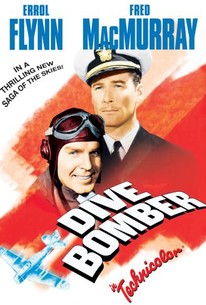 The first major prewar "preparedness" film to be lensed in Technicolor (the original prints are gorgeous!), Dive Bomber starred Errol Flynn and Fred MacMurray as Navy surgeon Lt. Douglas Lee and flight commander Joe Blake, respectively. Having helped Lee design a high-altitude pressure suit which will prevent "blackouts" during power divers, Blake intends to test the suit himself. Lee and researcher Dr. Lance Rogers (Ralph Bellamy) nix Blake's plan after several test-flight tragedies, but in the end Blake proves the efficacy of the suit-albeit at a great personal price. The landlocked romantic subplot involves the romantic rivalry between Lee and Blake over all-purpose heroine Linda Fisher (Alexis Smith). Produced with full cooperation of the Naval Air Corps, Dive Bomber was filmed on location at the Navy's air stations in San Diego and Pensacola, and aboard the aircraft carrier Enterprise. Among the Warner Bros. contractees playing the pilots are such stars-to-be as William Hopper, Charles Drake, Gig Young and Alan Hale Jr.

Alice Talton
as Girl at Newsstand

This is a docudrama at best, and that director, with those actors, was not the right man to make a docudrama.

Though well-crafted, it seems more geared for aviation buffs than a general audience.

There are no featured audience reviews yet. Click the link below to see what others say about Dive Bomber!