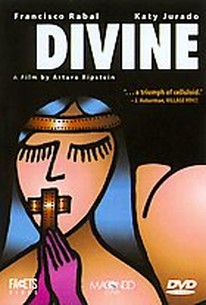 Mexican director Arturo Ripstein helmed this Mexican-Argentine-Spanish religious drama with Buñuelian overtones. Based on true events that took place in Mexico during the '70s, the film is updated to the present. Mama Dorita (Katy Jurado) leads the New Jerusalem cult with film-buff Papa Basilio (Francisco Rabal). Basilio's worship of movies explains the cult's costumes, imitative of Hollywood Biblical epics. When Dorita dies, she chooses teen Tomasa (Edwarda Gurrola) to give birth to the New Messiah. Unable to handle this sudden power, Tomasa instead proclaims herself to be the Whore of Babylon, forcing male cultists to have sex with her. Shown in the Certain Regard section at the 1998 Cannes Film Festival. ~ Bhob Stewart, Rovi

There are no critic reviews yet for Divine. Keep checking Rotten Tomatoes for updates!

There are no featured reviews for Divine at this time.