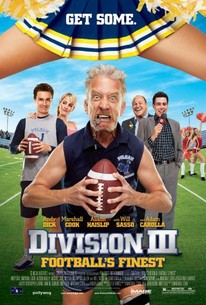 The crowned losers of Division III football make a big comeback attempt after their coach dies, and a certified psychopath gets hired to take his place. The Pulham Blue Cocks couldn't win a game to save their lives. Now they are minus a coach to go along with their dreams of gridiron greatness. But enter Rick Vice (Andy Dick), the kind of coach who won't settle for second best. He may have a shady criminal record involving a violent incident with a pee-wee football team, but he's determined to whip the Pulham Blue Cocks into shape -- even if they die trying! ~ Jason Buchanan, Rovi

Will Sasso
as Terry Lockwood

Dick does whatever he can to get a laugh, even if it's terribly embarrassing and doesn't end up getting one.

There are no featured audience reviews yet. Click the link below to see what others say about Division III: Football's Finest!