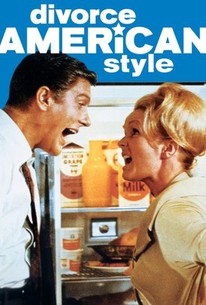 An unhappy couple discover breaking up really is hard to do in this satiric comedy. Richard Harmon (Dick Van Dyke) and his wife, Barbara (Debbie Reynolds), are a typical married couple in American Suburbia -- which is to say they're not very happy with each other. After 15 years together, Richard and Barbara decide they've reached the end of their collective rope, and after several rounds of marriage counseling proves fruitless, they file for divorce. Between negotiating child custody, alimony, and finding new places to live, Richard and Barbara discover divorce isn't appreciably easier than being married; meanwhile, Richard makes a new friend in Nelson Downes (Jason Robards), a fellow divorcé who would love nothing more than for Richard to marry his former wife, Nancy (Jean Simmons), and take away the burden of alimony. Also featuring Van Johnson, Lee Grant, Shelley Berman, and Eileen Brennan in her first film role, Divorce American Style earned an Oscar nomination for Norman Lear and Robert Kaufman's original screenplay.

Pat Collins
as Herself

Patricia Collins
as Herself
View All

The charm of this film is in its low-key approach. The plot isn't milked for humor or pathos: Both emerge naturally from familiar situations.

It actually has something truthful to say about the way we live now and says it with a savagery of tone that runs completely counter to the warm, babbling, socially meaningless flow of our comic mainstream.

Undoubtedly, the movie's makers sat down to several screenings of Divorce Italian Style with pencils and pads in hand and mapped out American counterpart situations. But the ideas do gain in the American translation.

A really fantastic cast manages to producer a really okay movie. DAS is not with out it's moments, but it pales in comparison to the Italian original.

A good cast, but you can tell from the title and plot that this is supposed to be the American take on the film Divorce Italian Style, which was a much better movie. This movie isn't all that funny, but it has a good cast.