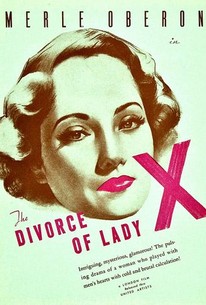 The Divorce of Lady X Photos

Filmed in lavish Technicolor and given Tiffany production values by producer Alexander Korda, the British comedy Divorce of Lady X is at base a trivial little farce, buoyed by the sprightly performances of star Merle Oberon and Laurence Olivier. Ms. Oberon plays a costume-party guest who is forced to stay in a hotel overnight due to inclement weather. There are no rooms available, so the management prevails upon handsome but stuffy lawyer Olivier to give up half of his suite to the lovely Oberon. After a chaste evening together, Olivier becomes obsessed with Oberon, deducing that her elusiveness is due to the "fact" that she is married. Actually, she is nothing of the kind, but when an old school chum (Ralph Richardson) comes to Olivier's office to arrange for a divorce, Olivier jumps to the conclusion that Oberon is his old friend's soon-to-be "ex". Based on Gilbert Wakefield's play Counsel's Opinion, Divorce of Lady X has become a familiar presence on cable TV because of its public domain status; less familiar is an earlier movie version of the Wakefield play, filmed in 1932 by director Allan Dwan.

H.B. Hallam
as Jefferies, the Butler

Critic Reviews for The Divorce of Lady X

No directorial skill in the world could make the first ten minutes seem smooth and convincing or pretty Miss Oberon anything but an annoying pest. Once the point is made, however, the picture settles down to first-rate comedy.

Though opulent in color costumes and design, this minor British screwball comedy is mostly known for its on-screen teaming of two young actors, Laurence Olivier and Ralph Richardson, in their pre-Hollywood era, who would become legendary stars.

Audience Reviews for The Divorce of Lady X

There are no featured audience reviews yet. Click the link below to see what others say about The Divorce of Lady X!

The Divorce of Lady X Quotes