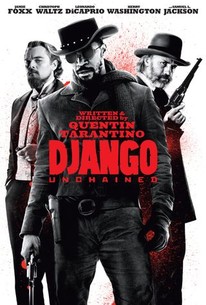 Set in the South two years before the Civil War, Django Unchained stars Jamie Foxx as Django, a slave whose brutal history with his former owners lands him face-to-face with German-born bounty hunter Dr. King Schultz (Christoph Waltz). Schultz is on the trail of the murderous Brittle brothers, and only Django can lead him to his bounty. Honing vital hunting skills, Django remains focused on one goal: finding and rescuing Broomhilda (Kerry Washington), the wife he lost to the slave trade long ago. Django and Schultz's search ultimately leads them to Calvin Candie (Leonardo DiCaprio), the proprietor of "Candyland," an infamous plantation. Exploring the compound under false pretenses, Django and Schultz arouse the suspicion of Stephen (Samuel L. Jackson), Candie's trusted house slave. -- (C) Weinstein

Russ Tamblyn
as Son of a Gunfighter

Amber Tamblyn
as Daughter of Son of a Gunfighter

A good film, and a crazily entertaining film, until Tarantino does blow everything up, at which point it just becomes rather silly.

The film is at times brilliant but mostly infuriating. It is a good movie in that masturbatory way most Tarantino films are good.

Django Unchained is a ruthless and romantic epic that is also filled with unbridled entertainment that challenges audiences, rather than coddling them.

It's an intelligently provocative, massively entertaining exercise in postmodern revisionism, highlighting how shamefully few movies Hollywood has ever made about slavery.

It was a mixed bag for me; some great moments scattered about amongst lots of humdrum, considering the subject matter.

I think to myself that "disappointed" is a strong word for it. But it's not. Pieces work but somehow the movie just really didn't gel.

Django is another example of Tarantino looking at cultural American history through the lens of privilege, twisting truth and fiction through a grotesque, funhouse mirror.

Django Unchained is a miserable work, implausible and unconvincing from beginning to end (unlike the best "spaghetti Westerns" Tarantino claims to admire).

Christoph Waltz once again turns in a performance (largely due to the writing) that is astoundingly likeable and worthy of award consideration.

Mike Massie
Gone With The Twins
View All Critic Reviews (294)

Tarantino empowers a black slave named Django to get his well-deserved revenge against his white oppressors, creating an exhilarating, revisionist Western full of panache as he injects Sergio Corbucci's directing style in a top-notch vengeance-driven blaxploitation plot.

Maybe Sergio Leone's best film is an update of everything he's done before, only politically corrected, historically corrected, with new film technology taken into context. The black guy is the hero here, the man with no name named Django. Christoph Waltz has so much fun with his role that he should've paid Tarentino. At last Samuel L. Jackson gets to piss on the years of supposed "black parts" he's played to secure his career. Loved this. Half star removed for poorly written women's roles, but its forgivable. Otherwise, perfect.

The new Tarantino flick, I gotta be cruel, there can't be any favours now, straight down the line. So first off I've never really been much of a Tarantino fan, the guy made two decent films many many years ago ('Pulp Fiction' and 'Reservoir Dogs') and has pretty much lived off the reputation he gained ever since. So what we have here is a 60/70's type retro homage to the classic violent westerns of that time mainly made by Leone. The thing is this film is not a spaghetti western, it may look like one or try to imitate one but its not. The term spaghetti western was coined during the 60's for western films that were made in Italy/Spain with Italians and other Euro folk, for budgetary reasons. This is a mega budget film jam packed with huge squillion dollar earning stars, far from the source material methinks. Think 'The Man with the Iron Fists' and you're on the right track my friends, this is a western equivalent. This may have worked much better with more of an unknown cast. The huge overpaid names hired tend to detach you from the reality of the setting, you'd think Tarantino would know better. The plot is the standard revenge one but with a difference, this western is all about African slaves, one particular slave fighting back, fighting the man. Now this is a plus point for the film as its not shying away from real history unlike many old westerns. This is a great concept for a great realistic drama/thriller, unfortunately what we get is yet another typical Tarantino personal fanboy flick which kinda borders on old blaxploitation flicks. You could almost say the film has Superfly stylings, Jamie Foxx's character turns from innocent slave to Shaft in the wild west accompanied by a dreadful soundtrack to boot, there's even rap in this! Yes the film is violent which is cool but again Tarantino just goes way over board almost making the film a spoof in some places. Now having ridiculously huge exploding bloody squibs is top stuff, exhibit A: 'Robocop' and 'Total Recall'...the 90's version of course, what do you take me for?! geez! But these films were futuristic sci-fi so you could believe the excess blood as possible with futuristic weapons. This film is a period set western so it is totally ludicrous looking, of course its not suppose to be a serious film but these little things matter for your suspension of disbelief. To be honest I was kinda expecting an old style western much like Eastwood classics such as the 'Dollars' trilogy or 'Josey Wales' or the original 'Django' even! But alas I was disappointed with this film, disappointed to see its just another excuse for Tarantino to use profanity and needless violence for almost three hours!!! wha?!! Acting is pretty terrible from everybody bar Waltz who really should be in more serious epic roles where his talent would be better shown off. Jackson is perfect for the film as he gets to shout and swear continuously using his two favourite words whilst showing very little other talent, this man is the most over hyped actor in cinematic history. Didn't care about any of the characters a tall, only Waltz gave an interesting turn as the innocent peaceful dentist with a lethal hidden skill. Maybe they should of used Denzel Washington for Django, Foxx is bland and dull. Not advisable to watch if you're a touchy liberal lefty that's for sure, this film may be a homage of sorts but the 'N' word is said so much you may come out thinking its OK to use it much like any other naughty word. I realise this film has done well but I simply can't understand why, I've seen a whole string of films recently which are far superior to this. For me this had potential to be a really good serious western ala 'Unforgiven' but instead its just more funky Tarantino retro trash.

A time pass flick that falters a bit too much towards the ending.