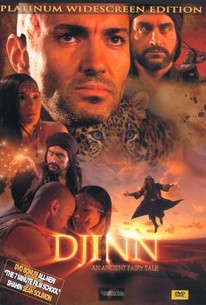 The title - with its distinctly Middle Eastern origins - refers to a spirit existing on a lower plane than angels, capable of assuming both human and animal forms and influencing mankind for either beneficial or nefarious ends. Director Shahin Sean Solimon's fairy tale concerns a young man named Imad whose love, Anima, is stolen by such an entity; to retrieve her, the hero must surmount the great vices of fear, greed and lust, and embark on a journey through such formidable regions as the Black Desert, guided by an angel and a fortune teller.

There are no critic reviews yet for Djinn. Keep checking Rotten Tomatoes for updates!

This is a little on the interesting side. Good music.