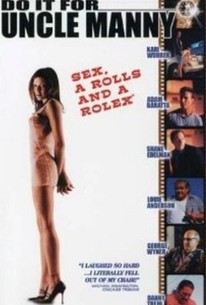 Do It For Uncle Manny Photos

A mockumentary set in Hollywood, Do It for Uncle Manny is the tale of Stu (Shane Edelman). Stu, the favorite nephew of the titular producer Manny Solis, is in town to stay at his uncle's place while interviewing for a posh job at a law firm. Although money and Armani suits beckon, Stu really wants to become a scriptwriter. So he turns to his best friend Danny (Adam Baratta, also the film's director), who waits tables at a Chinese restaurant of dubious repute and goes on desultory acting auditions. It isn't long before Danny and Stu are painting the town a sickly shade of Bachelor Beige, with Danny teaching his friend the seven basic laws of picking up women and leading him along the merry path to County Sleaze. Along the way, however, they meet Jenny, a swinger who proves to be the men's match in more than a few ways, including her ability to lie and manipulate with the best of them. Do It for Uncle Manny, which features performances from Louie Anderson and Paul Mazursky, was screened at the 2002 Philadelphia Festival of World Cinema.

Critic Reviews for Do It For Uncle Manny

There are no critic reviews yet for Do It For Uncle Manny. Keep checking Rotten Tomatoes for updates!

There are no featured reviews for Do It For Uncle Manny at this time.

Do It For Uncle Manny Quotes