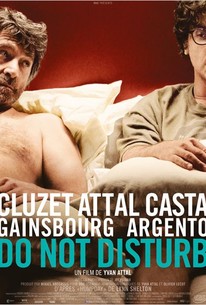 Do Not Disturb Photos

Two Parisian pals reunite years after college, and test their enduring friendship by having sex on camera in this remake of Lynn Shelton's mumblecore classic Humpday. Back in college, Ben (Yvan Attal) and Jeff (François Cluzet) were inseparable. Years later, Jeff is still partying hard while Ben makes plans to settle down and start a family with Anna (Laetitia Casta). Then, one night, Jeff shows up at Ben's comfortable suburban home completely unannounced. Picking up right where they left off, the pair sneaks out to a party where two gorgeous women (Asia Argento and Charlotte Gainsbourg) question that they are as open-minded as they claim. Scoffing at the contemporary concepts of manhood and masculinity, the two heterosexual friends decide to prove their mettle by shooting a gay porn together. Later, when the camera starts rolling, Ben and Jeff discover that some taboos aren't so easy to shatter.

Critic Reviews for Do Not Disturb

Proof that it's not just Americans cranking out pointless remakes...

Audience Reviews for Do Not Disturb

Most of this pointless film is a long, boring and unfunny build-up to something really frustrating - and things become repetitious very fast, with endless scenes and conversations stretched for much longer than our patience can take.

Do Not Disturb Quotes