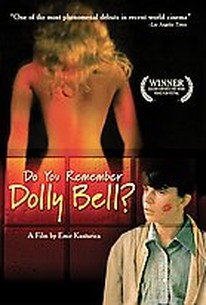 Filmed in Yugoslavia, Do You Remember Dolly Bell? is set in the Sarajevo of the mid-1960s. When the government begins relaxing its hold on individual rights, many citizens don't quite know how to handle their sudden freedom. The film concentrates on the effect an onslaught of Western culture (movies, music, clothing, creature comforts) has on a previously "sheltered" group of young Slavs. The main characters also adapt to the Sexual Revolution in a series of romantic (and lightly censorable) setpieces. Originally released in 1981, Do You Remember Dolly Bell won the Golden Lion award for Best First Film at the Venice Film Festival, the first of several such honors for its director, Emir Kusturica. ~ Hal Erickson, Rovi

Do You Remember Sarajevo? Emir Kusturica does, fondly and grittily

Ideals are retained and growing up is never finished in Kusturica's droll, moving debut.

A solid slice-of-communist-life film that succeeds because it avoids the pitfalls and cliches of the typical, bittersweet coming-of-age film.

"Do You Remember Dolly Bell?" starts with the local civic leaders deciding that the way to put a halt to youthful vice and sloth in Sarajevo is to form a dance band. To be honest, there is probably not that much to be alarmed about since it only includes the usual like smoking, drinking and running a lottery to buy a bicycle. Dino(Slavko Stimac), a teenager, takes little notice of it all since he is so busy with his studies on hypnotism. That is until Pog(Boro Stjepanovic), the local pimp, tells him to stash Dolly Bell(Ljilijana Blagojevic), one of his prostitutes, in his family's pigeon coop. With his first feature film that contains a couple of totally heartbreaking scenes, "Do You Remember Dolly Bell?" Emir Kusturica creates a bittersweet and spirited coming of age story where Dino is exposed to sex and death for the first time, giving him something to sing about. At the same time, he learns the world does not run like it was designed to. He is not the only one as his father(Slobodan Aligrudic), an alcoholic, is also a firm believer in Marxism which nobody ever gets right in the real world. Why else would the family spend six years in temporary housing waiting for a state apartment?