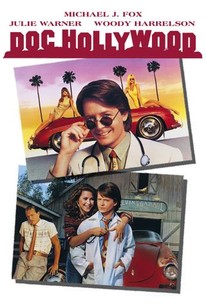 Critics Consensus: Doc Hollywood isn't particularly graceful in its attempt to put a '90s spin on its Capraesque formula, but a light touch and a charming cast make its flaws easy to forgive.

Critics Consensus: Doc Hollywood isn't particularly graceful in its attempt to put a '90s spin on its Capraesque formula, but a light touch and a charming cast make its flaws easy to forgive.

Critic Consensus: Doc Hollywood isn't particularly graceful in its attempt to put a '90s spin on its Capraesque formula, but a light touch and a charming cast make its flaws easy to forgive.

A big city doctor is stranded in a small rural town, where he finds love, professional challenges, and a pet pig, in this comedy. Fresh out of residence at a Washington D.C. hospital, hot-shot plastic surgeon Ben Stone (Michael J. Fox) hops in his Porsche and is headed for California, where a lucrative practice in Beverly Hills awaits. However, Ben accidentally plows into a fence in Grady, South Carolina; the wreck puts Ben's car out of commission, and the town's mayor, Nick Nicholson (David Ogden Stiers), sees to it that Ben is sentenced to perform community service while he's waiting to get his car back on the road. For a week, Ben will serve as the community's general practitioner, filling in for the aging Dr. Hogue (Barnard Hughes). Many of the locals go out of their way to make Ben feel welcome, since they need a new full-time doctor and hope he'd be interested in staying on a permanent basis. Ben isn't especially interested until he meets Lou (Julie Warner), a beautiful, intelligent, and feisty local woman he first meets as she's enjoying a morning skinny-dip. Ben now finds himself wondering what the odds are of winning her away from her less-than-brilliant boyfriend Hank (Woody Harrelson). Bridget Fonda has a memorable supporting role as Nancy Lee, who doesn't make much of a secret of her attraction to Ben. ~ Mark Deming, Rovi

Melanie MacQueen
as Woman with Spider

Adele Malis-Morey
as Woman with Glasses

Janis Bjorkland
as Girl with Spider

Daniel Cerny
as Boy with Spider

There's nothing startling here, nothing flashy, nothing complex. Just the solid, old-fashioned pleasure of watching an expert cast carry out a well-crafted story that celebrates the virtues of life off the fast track.

Fox and Julie Warner strike a compelling chemistry despite the relationship's predictability.

The rare film that actually improves as it develops. What begins as an all-too-standard fish-out-of-water comedy eventually grows into something more.

The film has a gentle charm that surpasses expectations.

Pandering pablum, but not without its charms.

The destination is obvious. Getting there is all the fun.

Fox is back where he belongs, playing self-effacing comedy and allowing his boyish style to frame a characterization.

Director Michael Caton-Jones leans much heavier towards the romantic end of the rom-com spectrum rather than out-and-out laughs, but the film remains heart-warming without ever approaching a syrupy corn-fest.

Fox's character has been accurately described as Alex Keaton with a stethoscope. It's a role he knows well and can perform with ease. But he's burdened with a script that has no edge.

Caton-Jones, who showed his gifts for ensemble in "Memphis Belle," contrives to keep "Doc Hollywood" appealing, if not suspenseful, by his affectionate handling of his large and well-chosen cast.

Cute movie - although the plot is exactly as expected. A highfalutin big city doctor lands up in a small town complete with caring people and "a beautiful, intelligent, and feisty" woman and has to consider his options.

Campy, off color, and not so daringly original, Doc Hollywood is enjoyable, if not a slight cliche of the standard comedy. Julie Warner keeps it very heartfelt and original, even if she has to be nude in order for her to be in it.

He was a big city plastic surgeon...in a small town that didn't take plastic. A lot of LOLs. Typicall Michael. J Fox Movie