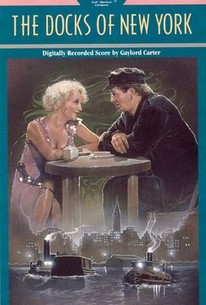 The smokily erotic ambience of Josef Von Sternberg's silent Docks of New York is best appreciated on a big theatrical screen--but only if the available print is at the very least second-generation. George Bancroft plays a two-fisted ship's stoker on shore leave. He saves Betty Compson from committing suicide; though the girl displays little gratitude, the inebriated Bancroft impulsively marries her. After he sobers up, Bancroft is prepared to set sail and leave his new wife waiting for him...perhaps forever. The story is secondary to the virtuosity of the direction and camerawork (one scene is framed in the eye of a needle!) Considered by many to be Von Sternberg's greatest film, Docks of New York is a prime example of the silent cinema at its zenith.

Guy Oliver
as The Crimp

May Foster
as Mrs. Crimp

Lillian Worth
as Steve's Girl
View All

Critic Reviews for The Docks of New York

Sternberg suppresses direct emotional appeal to concentrate on something infinitely fine: a series of minute, discrete moral discoveries and philosophical realignments among his characters.

It fulfills their requirements, somewhat obscure to this reviewer, of rhythm, plasticity and unity. In simpler and more popular terms, it seems to be exceptionally good motion picture entertainment.

It's a corking program picture, thanks to George Bancroft, a good story and Julian Johnson's titles.

An eerie, wistful hymn to the forgotten men and women of the working class looking for their own slice of happiness in grungy places.

Furthman specialized in unclassy tales of redemption in tawdry settings, featuring charming semi-brutal men and glamorous women who were a little ruined.

The film's romantic fatalism is compelling, and von Sternberg creates some stunning imagery out of his lowlife settings.

Josef von Sternberg enjoys a challenge, so he pulls into Borzage's waterfront to suppress and heighten emotionalism with sang-froid deadpans.

... a turn-of-the-century bowery answer to Sunrise, with a romantic idealism fighting its way out of hard-scrabble lives and resigned characters of the waterfront culture.

visually evocative and narratively intriguing, such that even its generally terrible ending can't quite undermine the overall sense that you have just seen something profoundly of its time and ahead of it

Von Sternberg is a director of situations, not of suspense -- it is his mastery of the subtle eye-line interplay of silent cinema, his command of mise-en-scene and mood, that makes the love between these characters credible.

Audience Reviews for The Docks of New York

A ship worker falls for a suicidal woman. Much of George Bancroft's performance as Bill Roberts is spent strutting and posing with a masculine air that borders on satire, and the plot of the film is victim to silent film's inability to express full character interaction: if this is a love story, it's a love that the audience must endow with its own background and motivations. However, the film is a technical achievement. The cinematography is beautiful, and while Bill is a tough guy to like, there's enough compassion in him that we can find ourselves siding with him. This is a seedy world, and director Joseph von Sternberg presents it in all its bleak charm. There aren't many good guys, so von Sternberg makes the bad guys all themore interesting. Overall, this is a solid and remarkable film but not without its flaws.

In "The Docks of New York," Bill Roberts(George Bancroft) is a stoker on board of a steamboat that is about to dock for a night in New York. As such, he has plans but is warned not to be late for the boat's departure in the morning. Those same plans hit a snag when Bill dives into the harbor to rescue Mae(Betty Compson) who just tried to kill herself. As she recovers her wits, they get to know each other. Just after he shows off his tattoos, she pops the question. "The Docks of New York" is an engrossing and lively film about people in the lowest rungs of life who are not so much given a reprieve, but just the barest glimmer of hope. At the start, Mae has given up on any possibilties for her future while Bill takes advantage of whatever fun he can find for himself, when he is not at his grueling job, to enjoy himself and forget everything else. All of which is set in a close knit community of people who look out for each other when they have nothing else.

The Docks of New York Quotes