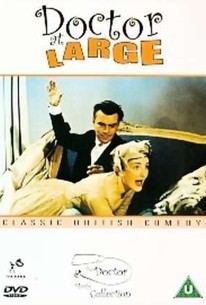 The third of the British "Doctor" series based on the novels by Dr. Richard Gordon once more stars Dirk Bogarde as MD Simon Sparrow. Having completed his training, Sparrow is on the lookout for a job, hopefully with a prestigious hospital. He winds up on the Riviera, has several comic and romantic misadventures, and ends up back at St. Swivvin's, his alma mater. Bogarde's leading lady is Shirley Eaton, who later became world famous by being "painted to death" in 1964's Goldfinger. This would be Dirk Bogarde's penultimate appearance in the "Doctor" series; his last was 1963's Doctor in Distress.

Junia Crawford
as Girl on Boat

A.E. Matthews
as Duke of Skye and Lewes

Critic Reviews for Doctor at Large

No. 3 in the British series of slaphappy medical farces has several slow or dullish episodes but enough lively bits to qualify it as a recommendable item.

There are no featured reviews for Doctor at Large at this time.