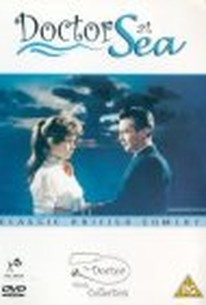 This second entry in the British "Doctor" series once more stars Dirk Bogarde as young medico Simon Sparrow. Securing his first job as ship's doctor on a freighter, Simon again runs afoul of James Robertson Justice, here cast not as the irascible Sir Lancelot Sprat but as ship's captain Hogg. Unexpectedly, the freighter is obliged to take on passengers--specifically, the man-hungry daughter (Brenda DeBanzie) of the shipping magnate who owns the vessel, and toothsome French chanteuse Helene Colbert (Brigitte Bardot, in her first English-language film). As the older woman makes a play for the crusty captain, Helene sets her sights on the nonplussed Dr. Sparrow. Often funnier than its predecessor, Doctor at Sea proved the viability of the "Doctor" series, prompting several chucklesome sequels.

Critic Reviews for Doctor At Sea

Some muscular but amusing clowning by the majestically bearded James Robertson Justice partially atones for a lot of ill-judged slapstick in this sequel to Doctor in the House.

Funny entry in long line of Doctor at... comedies produced in Great Britain.

Audience Reviews for Doctor At Sea

Shooting for "average" or "pleasant" works for this unpretentious, light comedy about a young doctor (Dirk Bogarde) going to sea aboard a freighter (!!!) to escape a possible planned marriage with his superior's ugly daughter. Onboard ship is an untidy crew and a ornery captain that must be contended with. Luckily at one port he runs into Brigette Bardot (in her first foray into English language films unfortunately), alleviating the downward trajectory of the threadbare plot, but only just so. Forgettable, but pleasantly so.