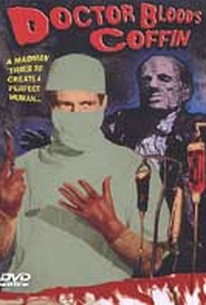 Between his internship in Canadian television and his A-feature work on The Ipcress File, Sidney J. Furie directed an old-fashioned horror flick called Doctor Blood's Coffin. Kieron Moore stars as research scientist Dr. Peter Blood, who's been experimenting with heart transplants. Thrown out of Vienna for wishing to move from lab animals to humans, Blood sets up shop in the village of Cornwall. Within a few months of his arrival, several Cornwallians disappear from view. Dr. Blood, you see, has been merrily transplanting hearts in a secret lab located in an abandoned tin mine. Unfortunately, one of his resurrected humans reacts negatively to the operation--especially after he discovers that Blood has been dallying with his wife. ~ Hal Erickson, Rovi

A low-grade, low-budget Hammer type of exploitation horror film that is lurid and makes little sense...

Another low budget mad scientist movie that's not well made, but has a couple of good actors. I really was disappointed with it, it has such a cool title.