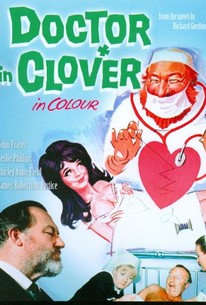 Doctor in Clover is the next-to-last entry in the British "Doctor" comedy film series. After losing his government job, doctor Gaston Grimsdyke (Leslie Phillips) signs up for a medical school course with his old tutor-nemesis Sir Lancelot Spratt (welcome back, James Robertson Justice). What follows is the standard melange of double- and single entendres, not to mention the usual dalliances with such underdressed lovelies as Shirley Ann Field, Fenella Fielding and Elizabeth Ercy. A subplot involves a rejuvenation serum that is disastrously applied to the behemothlike Sir Lancelot. Though allegedly based on the original "Doctor" novel by Richard Gordon, any resemblance is purely coincidental.Doctor in Clover was also released as Carnaby MD, in deference to the "Swinging London" craze.

Critic Reviews for Doctor in Clover

There are no critic reviews yet for Doctor in Clover. Keep checking Rotten Tomatoes for updates!

There are no featured reviews for Doctor in Clover at this time.