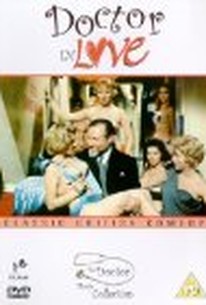 This is the fourth in a series of "doctor" films that began in 1953 with Doctor in the House. Unlike its predecessors, the chief medico is now Dr. Richard Hare (Michael Craig) and he tends to share the spotlight with a few colleagues, making this more of an ensemble effort. Dr. Hare is in his own hospital as a patient when he falls for the nurse (Moira Redmond) assigned to his room. That romance does not linger for long because he eventually meets the charming Dr. Barrington (Virginia Maskell) and really gives his heart away, metaphorically speaking -- this is not a transplant movie. Interspersed throughout the story of Dr. Hare and his colleagues are several funny episodes that have the imminently respectable protagonists turning up by accident at the wrong place -- such as a strip joint instead of a medical conference, or else they encounter unexpected characters, such as ladies of the evening, or they are involved in incidents that just seem to go from awkward to hilarious -- all making this a light-hearted spoof that would entertain any audience ready for an amusing film. ~ Eleanor Mannikka, Rovi

Critic Reviews for Doctor in Love

This British farce has received some harsh notices in the United Kingdom but I found it a reasonably diverting item.

There are two main sorts of British film joke at the moment: the Carry on series... and the Doctor series, a rather more sophisticated effort. I prefer Carrying on; at least they make you yelp occasionally.

There are no featured reviews for Doctor in Love at this time.