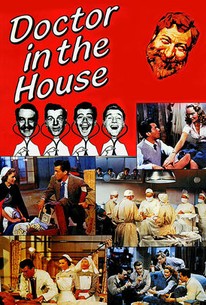 Doctor in the House Photos

The first of the popular British "Doctor" comedy series, Doctor in the House stars Dirk Bogarde as callow young medical student Simon Sparrow. Beginning his five-year internship at St. Swithin's Teaching Hospital, Sparrow continually runs afoul of head doctor Sir Lancelot Sprat (James Robertson-Justice). His social life is spiced up when Sparrow is taken under the wings of three student repeaters, who've flunked their prelims and are seeking a second chance. Most of the humor is very basic and not a little vulgar, ranging from the character name "Sir Lancelot Sprat" (say it really fast) to the now famous "What's the bleeding time?" routine. The film spawned several theatrical follow-ups, as well as a 1970s TV series; all were based on the semi-satirical novels by Dr. Richard Gordon. ~ Hal Erickson, Rovi

Ann Gudrun
as May

Critic Reviews for Doctor in the House

This amiable farce about medical students has been smashing box-office records in England. I find it rather patchy, with many a good joke stifled at birth, but James Robertson Justice is hilarious as a senior surgeon...

Doctor in the House, adapted from the book by Richard Gordon, works its way with determined high spirits through the repertoire of medical student jokes.

One can understand after watching it why the public wanted to see more of the characters and their misadventures.

Slight comedy based on the antics of a group of naughty Brit medical students at a London hospital.

There are no featured reviews for Doctor in the House at this time.

Doctor in the House Quotes