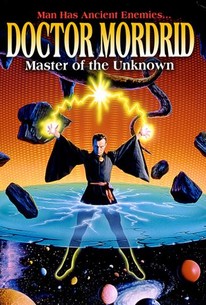 Doctor Mordrid (Jeffrey Combs) is an interdimensional sorcerer whose earth cover consists of acting as a super for a Manhattan apartment building. He gets word from his contact that a rival sorcerer, Kabal (Brian Thompson), has escaped and is coming to earth to take over the planet. Framed by Kabal for murder, Mordrid is sent to jail where his girlfriend (Yvette Nipar) is the only one who can help him escape -- and prevent the destruction of Earth. ~ John Bush, Rovi

Scott Roberts
as Fireman
View All

I suggest superhero buffs take some time out to indulge in Mordrid.

There are no featured audience reviews yet. Click the link below to see what others say about Doctor Mordrid!