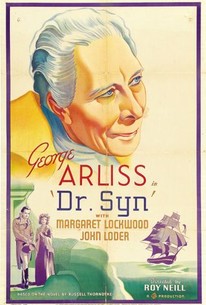 Sixty-nine-year-old George Arliss at first seems an unlikely casting choice for Dr. Syn, the 18th-century clergyman-cum-pirate created by novelist Roger Thorndyke. But Arliss never backed down from an acting challenge in all his 50 years of stage and screen work; if he wanted to play a pirate, he'd by gum play a pirate and have the audience firmly on his side all the way through (it turned out to be his final movie appearance). The film begins with the supposed death of the notorious Dr. Syn, then flashes forward to the coastal village of Dymchurch, where the kindly vicar (Arliss) is actually the allegedly deceased buccaneer, still operating his smuggling activities. Director Roy William Neill, better known for his American-made Sherlock Holmes films, keeps things moving at a fast clip. Dr. Syn was remade with Peter Cushing as Captain Clegg in the 1962 Night Creatures, then by Disney that same year as Scarecrow of Romney Marsh, with Patrick McGoohan as a considerably cleaned-up Syn. ~ Hal Erickson, Rovi

Livelier than most Arliss films, though not quite so improving.

There are no featured audience reviews yet. Click the link below to see what others say about Doctor Syn!