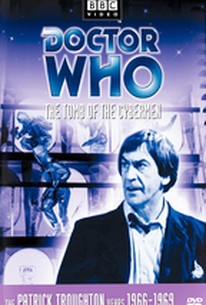 Critic Reviews for Doctor Who - The Tomb of the Cybermen

A fun story, but it falls somewhere in the middle of the scale for me. It's good, just not great. Still recommended, though.

Audience Reviews for Doctor Who - The Tomb of the Cybermen

The second incarnation of the Doctor (Patrick Troughton) takes his young companions Jamie (Frazer Hines) and Victoria (Deborah Watling) to the planet Telos, where they meet an archaeological exhibition keen to unearth a building associated with one of the Doctor's deadliest foes, the Cybermen. But when traitors in the group re-awakens the Cybermen from their frozen tomb, they not only threaten the party but the fate of the universe... SPOILERS AHEAD ============================================================= This story was enshrined in myth with the Doctor Who community due to the fact that it was missing from the BBC's archive until the early 1990's when it was found at a television company's archive in Hong Kong. The story itself can fall into several categories. Granted, it's a monster story with the Cybermen making an appearance and a "base under siege" story as the action takes place in a single place, the Cybermen's tomb, but it's also a story about traps - not only the trap laid by the Cybermen through the use of intelligence tests to find candidates to convert to be like them (much as in the form of the Borg assimilating in Star Trek), but the traps the Doctor lay down, firstly to find out the identities of the human traitors and then to defeat not only the traitors but the Cybermen as well. Patrick Troughton is on brilliant form in this adventure as the Doctor. Not only does he have to portray a fierce intellect, like William Hartnell before him, but he also hides it in this wonderful bumbling clown character to mask his intellect and cunning. This story also has room for Troughton to display a softer side to the Doctor's character, such as in the scene where he talks to Victoria about how he thinks of the family he has left behind for his life of travelling. No wonder Matt Smith has cited him as the incarnation of the Doctor who has inspired his performance. He is ably supported by Hines and Watling in their roles of companion, playing their roles like a niece and nephew to Trroughton's Doctor. The human villains come in the form of the manipulative Kaftan (Shirley Cooklin), the arrogant Klieg (George Pastell, who featured as a train conductor in the Bond film, From Russia With Love) and their strongarm protector, Toberman (Roy Stewart, who would go on to appear in a different role in the story Terror Of The Autons and appeared in the Bond film, Live And Let Die in the role of Quarrel). All the actors in the Cybermen suits are very much anonymous, but their voices are represented by regular monster voiceover artist, Peter Hawkins. The direction by Morris Barry is claustrophobic and adds menace to the story. It's a good story, with a simple but effective script and very good acting. Would it be worth it's legendary status if it had always existed in the BBC archive? Maybe not, there are stronger stories in the Doctor Who canon, but if you want to see a rare example of a complete story featuring Patrick Troughton as the Doctor, give this one a go.

Doctor Who - The Tomb of the Cybermen Quotes