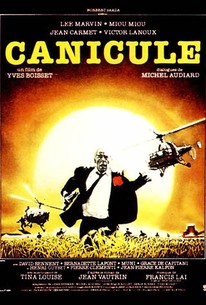 Dog Day was originally distributed in France as Canicule. In one of his last film appearances, Lee Marvin portrays a gunman on the lam with girlfriend Tina Louise. He briefly takes refuge with a farm family whose idiotic excesses make Marvin's former criminal associates seem like choirboys. The wife of the household (Miou-Miou) falls in love with Marvin, to the extent of planning his escape when the law catches up with him. Also craving Marvin's sexual attentions is the wife's sister-in-law (Bernadette Lafont), the craziest and most pathetic of the bunch. Dog Day was based on Herman, a novel by Jean Vautrin. ~ Hal Erickson, Rovi

There are no critic reviews yet for Canicule (Dog Day). Keep checking Rotten Tomatoes for updates!

There are no featured reviews for Canicule (Dog Day) at this time.