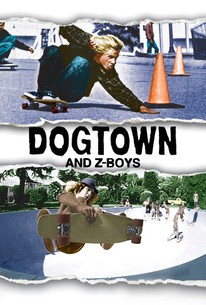 Critics Consensus: Dogtown and Z-Boys is a colorful, exhilarating look at the skateboarding subculture.

Critics Consensus: Dogtown and Z-Boys is a colorful, exhilarating look at the skateboarding subculture.

Critic Consensus: Dogtown and Z-Boys is a colorful, exhilarating look at the skateboarding subculture.

Skateboarding has crossed over into the mainstream population due in large part to the humble beginnings of a group of eight teenagers in an area of Santa Monica called Dogtown. It was there that this mismatched gang of kids from broken homes formed a group known as the Zephyr Team aka Z-Boys. They rode surfboards in the morning and skateboards in the afternoon, creating a style all their own. Desperate to ride, they used guerrilla tactics such as illegally skating abandoned swimming pools in upscale Los Angeles neighborhoods. But by the mid-70s, the skateboard phenomenon had caught on, and a few of the Z-Boys were scooped up by corporate sponsors and offered large sums of money to skate on their behalf. This elevated them from freewheeling street punks to celebrity skaters; they traveled the world, showing off their cutting-edge moves. Director Stacy Peralta, one of the original Z-Boys, reunites the original crew 25 years later to hear in their own words what it was like.

Sean Penn
as Narrator, the narrator

Critic Reviews for Dogtown and Z-Boys

It's made with great authority; director Stacy Peralta, in his younger years, rode ramps with the best of them and was the movement's shrewdest self-promoter.

You want to know more about their private lives than you get. But most viewers may be too stoked by the sheer adrenaline rush of the subject to care.

Package is lively, if loosely structured.

This propulsive, highly satisfying 2002 documentary concerns a group of daredevil skateboarders from an economically depressed and dangerous area of Santa Monica known as Dogtown who reinvented the sport in the 70s.

Quite possibly the best documentary about youth and sport since Hoop Dreams.

The film's buoyancy is permissible in approximating the gusto that was the hallmark of the Z-Boys as they took their guerrilla surfing skills to the arena of skateboarding.

Raw, baby, raw. That's what this documentary is, and that's why it's not meant for Blu-ray.

Before Tony Hawk, skateboarding had the Z-Boys.

Skateboard-legend-turned-filmmaker Stacy Peralta rips open the paradigm of the documentary form in much the same way that he and his young Santa Monica Zephyr Competition Skate Team revolutionized skateboarding in the mid-'70s.

Marred by a self-importance and heavy-handed assertion of mythic status that some may well find misplaced or just downright ridiculous.

I know exactly nothing about skateboarding, but this wild, exuberant documentary puts it all in perspective, outlining a crew of 12 surfers-turned-skaters who pioneered the sport -- and, some say, the art form.

Audience Reviews for Dogtown and Z-Boys

Skip Engblom: Children took the ruins of the 20th century and made art out of it. "The Birth of Extreme" Dogtown and Z-Boys is one of the more entertaining documentaries I've ever seen and actually one of the first documentaries I remember watching. The craziest thing about my love for this movie, is that skateboarding and everything that goes with it, isn't something that really interests me. Stacey Peralta, who is a fantastic documentary filmmaker, know exactly how to keep this movie fast paced and interesting.  The movie did end up making me interested in the Z-Boys story. It's enjoyable to see how these street kid, surfers reinvented a dying sport and made it something that everybody knew about. Main highlights of the film include concrete warfare, where they would sneak into people's backyards and ride their pools and also the first skate competition that the Zephyr skate team was a part of. If you've seen Lords of Dogtown and enjoyed it, this is something you should give a look. It's a great companion film to Lords of Dogtown and both are fun and entertaining films to watch. If getting the more in depth look into the movement is important to you, then Dogtown and Z-Boys is the way to go.

Interesting documentary on the birth of skateboarding. Best watched as a companion piece with the superior 'Lords of Dogtown'.

"This is concrete warfare we're talking about... if you're going to ride you gotta get on that shit." Documentary about the pioneering 1970s Zephyr skating team.

REVIEW
Waycool documentary by legendary skateboarding ace Peralta chronicling the origins of the original extreme sport with vintage Super 8mm home movie archival footage, black & white stills, and assorted media combining with a classic rock and roll score to form a comprehensive and obvious valentine to a way of life. Gravity defying gravitas is captured like lightning in a bottle showing the wayfarer scruffy charisma and authority-defying nonchalance that has a visceral thrill in watching underdogs become cult heroes. Excellent portrayal of unbridled angst, anomie and pure adrenaline rushes from curling on a wave from the prototypical surf in the Pacific Ocean to the concrete playgrounds of abandoned suburban pools. Narrated by perfect choice, Sean Penn, The Artist Formerly Known As Spicoli.

Sean Penn was in this? Oh yes he was the narrator. That explains why I didn't see him. It takes a special documentary to make a person who doesn't care about a subjec to take an interest in it. I have no interest in the 1970s Zephyr team and I don't have much interest afterwards. Very insider baseball.