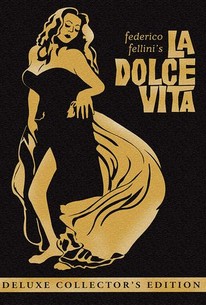 Critics Consensus: An epic, breathtakingly stylish cinematic landmark, La Dolce Vita remains riveting in spite of -- or perhaps because of -- its sprawling length.

Critics Consensus: An epic, breathtakingly stylish cinematic landmark, La Dolce Vita remains riveting in spite of -- or perhaps because of -- its sprawling length.

Critic Consensus: An epic, breathtakingly stylish cinematic landmark, La Dolce Vita remains riveting in spite of -- or perhaps because of -- its sprawling length.

In this Federico Fellini film, Marcello Mastrioanni stars as Fellini's alter ego, here depicted as a gossip columnist. Having left his dreary provincial existence behind, Mastrioanni wanders through an ultra-modern, ultra-sophisticated, ultra-decadent Rome. Throughout his adventures, Mastrioanni's dreams, fantasies, nightmares, and fears are mirrored by the hedonism all around him.

Anna Maria Salerno
as Her Friend

Oscar Ghiglia
as Their Pimp

Gino Marturano
as Their Pimp

Rina Franchetti
as Their Mother

Aurelio Nardi
as Their Uncle

Ida Galli
as Debutante of the Year

Loretta Ramaciotti
as Woman in Seance

Leonida Repaci
as Steiner's Other Guest

Anna Salvatore
as Steiner's Other Guest

Letizia Spadini
as Steiner's Other Guest

Margherita Russo
as Steiner's Other Guest

Winie Vagliani
as Steiner's Other Guest

Desmond O'Grady
as Steiner's Other Guest

Umberto Orsini
as Man in Sunglasses That Helps Nadia Strip

Giovanna Busetti
as Lying Child of The Miracle

Princess of Monteroduni
as Lady in White Coat at Castle

Angela Giavalisco
as Woman at Airport

Maria Mazzanti
as Woman at Airport

Gloria Hendy
as Woman in Via Veneto

Noel Sheldon
as Man in Via Veneto

April Hennessy
as Woman in Via Veneto

Angela Wilson
as Woman in Via Veneto

Giovanni Querrel
as Man at Nightclub

I. Campanino
as Man at Nightclub

Teresa Tsao
as Woman in Nightclub

Giulio Citti
as Man at Nightclub

Romolo Giordani
as Man at Castle

Nina Hohenlohe
as Woman at Castle

Franco Rossellini
as The Beautiful Horseman

Joan Antequera
as Woman at Castle
View All

The western cinema has needed for a long time its own kind of healthy puritanism to counter that from the east - notably Poland - and with directors like Fellini and Karel Reisz it now seems that it is getting it.

Fellini admits to having a confused sense of values, to being as uncertain as a child. Why then does he try to make realist films? It's a great pity; for if La Dolce Vita had beenless grandiose and more private and personal it might have worked.

It is a brilliant film, but there is nothing sweet about it.

This film defined a decade before the decade arrived.

Fellini has set out to move us with the depravity of contemporary life and has chosen what seems to me a poor method: cataloging sins. Very soon we find ourselves thinking: Is that all?

At once a debaucherous ride through the celebrity-studded streets of Rome and a depressing, hedonistic mirror held up to its main character, Federico Fellini's La Dolce Vita takes you through the ringer in its 176-minute runtime.

Casting aside his prior neo-realism, Fellini seized on a flamboyance of spectacle, symbolism, aesthetic refinement, and unconventional narrative structure that was endlessly striking as well as provocative.

It is hard to capture the simultaneous enormity and intimacy of the film. It's one you can keep going back to, because you'll keep finding more.

This is a breathtaking film that never gets less mysterious or less compelling, each corner of Marcello's mind a little more broken than the last.

It's an odd, but perfect encapsulation of Fellini's interest in the relationship between public figures, the media and consumers, now mutated creatures obsessed with the grotesque circus that is pop culture.

The aesthetic of a structureless arrangement of episodes overshadows commentary on vanishing morals and societal decay to the point that many viewers will miss the message.

Mike Massie
Gone With The Twins
View All Critic Reviews (75)

Told in a brilliant episodic structure, this fascinating character study is the truest definition of Felliniesque: an exceptional film that is magical in its fanciful depiction of glamour in Roman aristocracy and depressing in the way it shows the decadence of a society and of man himself.

Italian Movie about a player that in 1960 must have raised eyebrows, I didnt enjoy it 1 star

This doesn't happen very often, but I must say, I'm rather baffled. I'm not sure how I truly feel about this movie. I don't know if I truly get it. I'm a smart guy, and I'd like to think I can 'get' artsy European cinema, but I am simultaneously aware of why this is called a classic but also baffled as to why it is so adored. The film tells the story of a tabloid photographer in Rome in the 50s who discovers that the high society world isn't all that it seems, that trying to find a balance betwween the relics of the past and the ever-growing ways of the modern world is complicated, and that it can be quite a challenge to discover who one really is amidst all of this. That's pretty much it. That's the plot in it's most simplified way. It doesn't take long to really get all of this, but the film is just under three hours. I really don't think it needed to be. However,the film is wall to wall with style and cinematic craft. The film has a neat structure (it takes place over the course of about a weeks worth of days and nights, though not consecutively), and there's all kinds of religious imagery and symbolism-allowing the viewer to either just read into it like there's no tomorrow, or just take it at face value. Normally I'm cool with this sort of thing, but again, the movie is just about 3 hours...and kinda slow at times. The film could have had far more substance, especially given the theme and premise, but the slice of life stuff it quite nice too. It just all happens to ramble far too often. Maybe I'm being too hard on this though. Maybe I should have been really exhauted and had my mind on other things when I sat down to watch it. Or maybe (and I'm probably in the minority here) Fellini was more full of crap than people might like to admit. I loved 8 1/2 , but I was in a different mood and mindset when I saw that. I do love the music and cinematography though. There's some really gorgeous (and sometiems surreal) images, and some sequences are just fantastic, but it's all just kinda hard to endure in one setting. Ther performances aren't bad, but it seems like Fellini was more interested in just letting everything just run wild instead of having a far tighter hold on things. Maybe the issues Im haivng with this can be attributed to the fact that, as a bunch of critics and scholars have said, this was a transitional film for Fellini between his neo-realistic stuff, and his whimsical art film. It has elements of both, and they are done well, but maybe they just don't blend all that wonderfully. I'm rambling, much lke the movie. I didn't hate it, but I found it very hard to endure. Is it a really good movie? Yeah. Is it really all that influential? Sure. Does it deserve all the accolades and respect it gets? To an extent. You should see this, just to say you finally saw it, because it is worth it. As a cohesive masterpiece though, I didn't find it to be that exactly. 4 stars for the film overall, and an extra half star just for the style and technique.