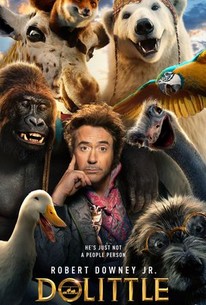 Critics Consensus: Dolittle may be enough to entertain very young viewers, but they deserve better than this rote adaptation's jumbled story and stale humor.

Critics Consensus: Dolittle may be enough to entertain very young viewers, but they deserve better than this rote adaptation's jumbled story and stale humor.

Critic Consensus: Dolittle may be enough to entertain very young viewers, but they deserve better than this rote adaptation's jumbled story and stale humor.

After losing his wife seven years earlier, the eccentric Dr. John Dolittle (Robert Downey Jr.), famed doctor and veterinarian of Queen Victoria's England, hermits himself away behind the high walls of Dolittle Manor with only his menagerie of exotic animals for company. But when the young queen (Jessie Buckley, Wild Rose) falls gravely ill, a reluctant Dolittle is forced to set sail on an epic adventure to a mythical island in search of a cure, regaining his wit and courage as he crosses old adversaries and discovers wondrous creatures. The doctor is joined on his quest by a young, self-appointed apprentice (Dunkirk's Harry Collett) and a raucous coterie of animal friends, including an anxious gorilla (Oscar (R) winner Rami Malek), an enthusiastic but bird-brained duck (Oscar (R) winner Octavia Spencer), a bickering duo of a cynical ostrich (The Big Sick's Kumail Nanjiani) and an upbeat polar bear (John Cena, Bumblebee) and a headstrong parrot (Oscar (R) winner Emma Thompson), who serves as Dolittle's most trusted advisor and confidante.

Jason Mantzoukas
as James the Dragonfly

Clive Francis
as Archbishop
View All

This nothingness doesn't even have the good grace to be a bad movie. The low-point of every single career involved.

Dolittle ought to have ... done less.

It's symptomatic of an awkward, unwieldy movie that has lots of material to show you and lots of surface distractions, but nothing at all to say.

The animals are not funny - not even for younger viewers - or even interesting.

The terrible script, the terrible visuals, the dull plot... the fact that at 101 minutes it really tested the patience, it is shockingly poor.

It really is horribly inert, and every time Downey opens his mouth to say something unintelligible, the film dies a bit more.

It's honestly not that bad of a movie. I think... if this movie had come out prior to Iron Man then we may have been a little bit more forgiving and more willing to go along for the ride.

The entire movie is incredibly uneven and discombobulated.

The VFX team do an impeccable job bringing the animals to life; however, the film's lowbrow sense of humour reduces the elegance of the visuals.

Dolittle suffers, a bit, from having so many characters, so many moving parts.

Dolittle barely pays attention to its story, and its three villains scream their characters' bad intentions well before they are actually revealed.

Downey brings a sense of bemused confusion, topped with a mealy-mouthed Billy Connolly impression that changes from scene to scene. It's a pantomime performance that makes the best of his finely tuned comic timing but feels sloppy and needlessly mannered.

There are no featured reviews for Dolittle at this time.