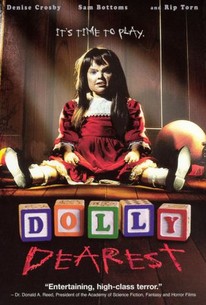 An ancient evil escapes its captivity in a Mayan temple in Mexico, kills the archaeologists who unearth it, and heads straight for a toy factory, which is eventually taken over by a new American owner (Sam Bottoms) and refurbished. When the owner's daughter (Candy Houston) discovers one of the previous owner's doll creations and brings it home, she soon develops a strangely intense attachment to her new toy. The family's superstitious housekeeper begins to suspect demonic work afoot... and is promptly dispatched by the doll. Another archaeologist (Rip Torn) attempts to further his predecessor's research into the demon's origins and finds that the evil force was conjured centuries ago by a black-magic cult, whose members aspired to breed a hybrid of man and demon. The little girl's parents refuse to accept this theory... until they come face-to-face with an army of the malevolent dolls, all of which are under the man-beast's control. A decent but obvious riff on Child's Play, this also makes a few chilling nods to Trilogy of Terror's rampaging Zuni doll segment, and the dollies are suitably spooky.

Will Gotay
as Luis

The laughs are more prevalent than the chills, but a few death scenes are quite appealing in their ambition and design.

Awful! ..and beyond boring. It's not scary or good. Don't waste your time, it's all too predictable.

Never underestimate those Dolls Movies. They can be very creepy. I think Movie was very under rated.

This movie scared the crap out of my little sister. She didn't play with her dolls for months.. I thought it was funny...

We DVR'd this little "gem". It is mostly PURE CHEESE...but there are some scenes with the possesed dolls that are actually kinda creepy. The storyline is ridiculous and the acting is mediocre, but (at times)..."dolly" is one creepy little bitch!