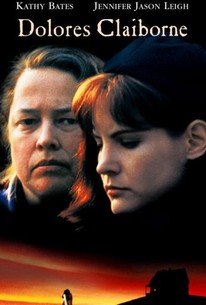 A daughter who has come to imagine the worst about her mother learns the facts are quite different -- and more shocking than she ever imagined -- in this adaptation of Stephen King's best-selling novel. Dolores Claiborne (Kathy Bates) has spent nearly a quarter of a century looking after a mean-spirited woman named Vera Donovan (Judy Parfitt) on a small island off the coast of Maine; when Vera is found dead after falling down a flight of stairs, Dolores is considered a prime suspect in her murder. Word of the affair reaches New York-based journalist Selena St. George (Jennifer Jason Leigh), Dolores's estranged daughter. Though she's about to leave on an important assignment, Selena instead flies to Maine to find out what's happened with her mother. Selena's father, Joe St. George (David Strathairn), died under mysterious circumstances 15 years before; more than a few people believe Dolores killed Joe, and many feel she did the same with Vera. Though the strong and tough-talking Dolores stands her ground, police detective John Mackey (Christopher Plummer) is convinced that there's more to her story than she's letting on, and in time Selena learns the ugly truth about her mother's connection to both deaths. This was Kathy Bates's second starring role in a film based on Stephen King's work; she earned an Academy Award for her breakthrough role in the movie version of King's Misery.

Matt Appleby
as Kid on Street

Thomas Skinner
as Kid on Street

It's rare to see a pop best seller come out this well in the movies.

Deftly cutting between the past and the present, director Taylor Hackford manages to establish a compelling mood and pace even though the pic lacks a thriller's true "Aha!" moment.

The role of Dolores may be rough around the edges, but it's a windfall for Ms. Bates, who does a walloping good job.

The mysteries of "Dolores Claiborne" are never gripping enough to consume an audience, and there are few, if any, surprises along the way. But the women are wonderful and reason enough to see the picture.

An engrossing, unsettling and, at times, powerful psychological thriller.

There are no chain saws, prosthetic hooks, apparitions or dead pets here, but you're kept at the edge of your seat almost to the end.

The story remains compelling even as some of the particulars become obvious before they're revealed.

A fulfilling score from Danny Elfman and a well-rounded script from Tony Gilroy are met with some superb juxtapositions ranging from the dreary, drab present overshadowed by the events from a rose-tinted past.

Dolores Claiborne is a strangely delightful, chilling, and powerful film all at once.

We should be examining this one again for daringly showcasing how men get away with their impulsivity and evil deeds. Great works of art like this are telling truths we want to bury and forget, but our subconscious won't let us.

It is well-acted and nicely textured, but scenes of euthanasia and child molestation, a flurry of violence and confusing flashbacks, and Leigh's hard, angry face ensure that it's no barrel of laughs.

A patient and mature thriller featuring a protagonist fascinating in her agony.

A rather untypical Stephen King story, although some of his regular motifs return, was turned into one of the best adaptions of his books. Set in the grey, gloomy, yet beautiful images of the present, as a daughter returns home for her mother's murder trial as well as the colorful, warm colors of the flashbacks, where we learn about their past and the fate of their husband and father, the story is carried by its strong characters and the great acting. Although the film consists mostly of conversations and moves rather slowly, it is still gripping and captivating in every moment, the solution and flashback showdown during the total eclipse of the sun are particularly exciting. A moving, very entertaining drama. Sometimes being a bitch is all a woman has to hold on to.

Constable: Going on a morning walk? Dolores Claiborne: No, I'm just packing the get-away boat, so I can make my great escape. Dolores Claiborne is a good drama from Stephen King that translates well to the screen. Kathy Bates gives a great performance as Dolores; a woman who is a suspect in a murder investigation. Jennifer Jason Leigh plays her daughter who has been gone for 15 years. A great supporting cast features Christopher Plummer, John C. Reilly, and Eric Bogosian(the guy from one of the most underrated films of all-time, Talk Radio). Danny Elfman gives the film a great score like always. It always makes me laugh when people complain about Stephen King books not being good movies. There's been Shawshank, The Green Mile, The Dead Zone, 1408, The Shining, Misery, Stand By Me, Carrie, Christine and Dolores Claiborne. Looks like they translate well.

A shocking drama from King, about a mother and daughter and a secret. I was pleasantly surprised by this movie, and I think you will be too. I highly recommend it.

This was far better than what I was expecting. (Even though I'm a Stephen King fan in general, this particular plot didn't seem too interesting to me.) There are a few turns and twists, most of which (if not all) are predictable, but the way they're unveiled is commendable. And the stellar performance by almost every actor involved only made the movie more worthwhile.