Dominick Dunne: After the Party2008 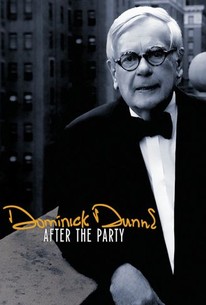 Dominick Dunne: After the Party Photos

In this documentary detailing the life and times of famed writer and former Hollywood producer Dominick Dunne, filmmakers Tim Jolley and Kirsty De Garis explore the complex nature of a man who is at once a critic of pop culture, and a part of it as well. Back in the 1960s, Dunne has a beautiful wife, three lovely children, and the attention of virtually every A-list Hollywood star - the latter of which was largely a result of his penchant for throwing the most lavish parties in all of Los Angeles. Before long, however, the high life had taken its toll on Dunne. His marriage failing, his career imploding, and his health deteriorating due to excessive drink and drugs, Dunne would later experience rebirth under the most unlikely, and unfortunate, of circumstances. In 1982 Dunne's daughter Dominique was strangled to death by her jilted boyfriend, a tragedy that prompted her fearless father - a decorated war hero - to begin documenting the criminal trials of the rich and famous for Vanity Fair magazine. In the decades that followed, Dunne experienced a powerful career resurgence thanks to his keen skill in exposing the outrageous cover-ups and ruses proliferated by top-dollar defense lawyers for the likes of OJ Simpson and Phil Spector. In this film, we get to learn the remarkable life story of the famed raconteur who has never been able to forgive and forget.

Critic Reviews for Dominick Dunne: After the Party

His interviews suggest candour and humility and a wonderful enthusiasm for whatever cause he's espousing.

Jolley and de Garis never come close to revealing whatever lurks in the heart of this intelligent, ambitious, plainly unhappy and not particularly admirable man, who bears scars from many wounds, not all of them self-inflicted.

It's an absorbing and honest film, but a sad one.

An indelible vision of a compromised, peculiar man.

An extraordinary account of a life spectacularly but not always wisely or well-lived.

I couldn't stop watching this riveting documentary about a man so obsessed by celebrity that he became one. But the story doesn't end there. Wealth, fame, power and love nose-dive on life's slippery dip.

This is a knockout story, superbly told.

Audience Reviews for Dominick Dunne: After the Party

There are no featured audience reviews yet. Click the link below to see what others say about Dominick Dunne: After the Party!

Dominick Dunne: After the Party Quotes