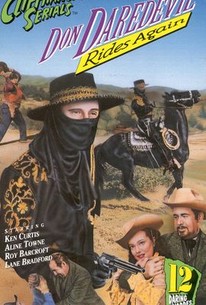 Stock-footage from Republic Pictures' earlier Zorro serials was served up once again in this 12 chapter cliffhanger, this time without the financially strapped studio having to credit Zorro creator Johnston McCulley or pay any royalties. Zorro simply became "Don Daredevil" (Ken Curtis), a foppish Easterner by day turned masked avenger by night. Like his not too distant relative, Don wore his disguise in order to battle nasty Roy Barcroft who, under a forged Spanish land grant, attempts to take over the surrounding ranch land. The fact that Barcroft has the local sheriff (I. Stanford Jolley) in his corner naturally complicates matters somewhat. Still a mostly unknown supporting player, Ken Curtis later gained fame as Festus on the long-running television series Gunsmoke. The slightly built actor was chosen for the role of Don Daredevil in order to match stock footage of Linda Stirling in Zorro's Black Whip.

There are no critic reviews yet for Don Daredevil Rides Again. Keep checking Rotten Tomatoes for updates!

There are no featured reviews for Don Daredevil Rides Again at this time.