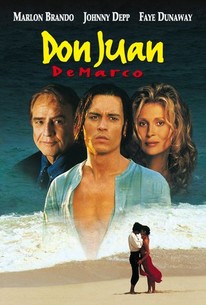 Critics Consensus: Don Juan DeMarco proves that a slight story can translate to entertaining cinema if it's acted out by a pair of well-matched professionals enjoying their craft.

Critics Consensus: Don Juan DeMarco proves that a slight story can translate to entertaining cinema if it's acted out by a pair of well-matched professionals enjoying their craft.

Critic Consensus: Don Juan DeMarco proves that a slight story can translate to entertaining cinema if it's acted out by a pair of well-matched professionals enjoying their craft.

A psychiatrist treats a most unusual patient, only to find that the doctor is the one who gains the most from their sessions in this philosophical romantic comedy. A young man in a mask and cape (played by Johnny Depp) is standing atop a billboard, threatening to jump. When the potential suicide is finally talked down, he's brought to a psychiatric facility where after one doctor washes his hands of the case, he's placed under the supervision of Dr. Jack Mickler (Marlon Brando), an aging psychiatrist soon to retire. The patient informs Mickler that he is actually the great lover Don Juan, who has seduced over 1,500 women, but has fallen into a deep depression after being unable to win the hand of the woman of his dreams. Mickler has ten days to work with "Don Juan," after which he will either be released on medication or committed to a long-term stay in a mental hospital. As Mickler talks with the young man, who speaks rapturously of the art of love, the doctor finds that his philosophies are helping to kick start his failing relationship with his wife (Faye Dunaway), and he slowly becomes convinced that his patient might really be Don Juan after all. Don Juan DeMarco's theme song, "Have You Ever Really Loved a Woman," became a major hit for singer and songwriter Bryan Adams; after working with Marlon Brando on this film, Johnny Depp cast the legendary actor in a key supporting role in his directorial debut, The Brave. ~ Mark Deming, Rovi

The film has its slow patches, and its fragile illusion probably doesn't stand up to close scrutiny. But, mostly, it dances on a very fine knife's edge between charm and absurdity, an irresistible paean to the art of kiss-kiss.

The movie, written and directed by Jeremy Leven, may not be one for the ages, but it's a pleasant, involving experience that intermixes fairy-tale romance with modern, deadpan comedy.

Though the material is thin, the actors do seem to be getting a kick out of playing off each other.

The film's greatest asset is its glorious acting, with special accolades to Brando, who here delivers yet another magnificent "comeback" performance.

It's a joy to see Brando throwing himself into the spirit of the thing, ardently courting his perplexed wife of 30 years, a ravished Dunaway (they share a lovely five-minute bed scene -- in one, uninterrupted take).

Don Juan is a glorious nut-case, played well by Depp, who mixes a faux nobleman's hauteur with an air of gentleness and longing. The film gets off track only when it makes him too self-aware.

Clearly, director-writer Jeremy Leven was too intimidated by the great Brando to insist that he enunciate. Too bad. But then, Leven didn't do his job well either.

Cushy it might be in appearance, but it is also pretty flat.

If ever there was a movie that is more enjoyable than it has any right to be on the surface, it's this one.

The movie certainly has its charming moments, but it's also so desperate to appear charming that the hard work begins to wear you down.

It is hard to think of another actor who could bring off Don Juan De Marco, as Johnny Depp has. With his voice like a caress and eyes that gently preen, he is entirely believable as a consummate seducer, who yet remains sweet and sincere.

Marlon Brando seems miscast in this film but this is compensated by a passionate Johnny Depp, who shines as an incurable, eternal romantic. A refreshing story about love and romance, and the main song will be stuck in your head for quite a while after the movie is over.

This is an extremely charming, fun, and romantic film about a psychiatrist who is given ten days (his final ten days before his retirement as it turns out) to treat a young patient who believes with all of his being that he is Don Juan, the world's greatest lover. Problems arise when the doc, and some of the hospital staff, all start to fall under his magical spell and get swept away by his cham, passion, and presence. This film is mostly light, but tons of fun and very charming. Johhny Depp is excellent, and he has a field day playing Don Juan. Marlon Brando is decent, and it's fun seeing him go toe to toe with Depp, but this isn't one of his better performances. It's not terrible, but he looks like he's mostly coasting through it. Dunaway is okay, but I would have liked her role to have maybe been a little more substantial. The music and cinematography are both great, and, though this film feels maybe a little undercooked, it's still satisfying enough.

I rarely get girly over heart-throb Actors, but if Johnny Depp wasn't tempting enough, in this film he appears as the World's greatest lover too! A romanticised Drama, with a phychological touch, enjoyable and easy watching.

So, Depp plays a Don Juan, a womanizer, who's overly romantic, just what every one of his fans wishes he was like... And that's it, there's nothing more to it, really. Not being a big fan of his, I was just really annoyed by this.