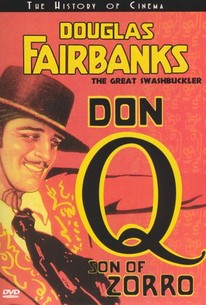 Douglas Fairbanks returns as the great Spanish swashbuckler in this sequel to The Mark of Zorro. Don Cesar de Vega (Douglas Fairbanks) is the son of the famous masked avanger, Zorro; he's been sent to Spain to continue his education and learn the ways of his homeland. He soon becomes a favorite of the local dignitaries, but this does him little good when he's falsely accused of murder. Faking his own suicide, Don Cesar goes underground, and posing as Zorro, begins his own investigation of the killing; eventually his father arrives, giving us two Zorros for the price of one. Mary Astor plays Dolores de Muro, Don Cesar's love interest, with Warner Oland and Jean Hersholt highlighting the supporting cast; Donald Crisp, who plays Don Sebastian, also directed.

Stella De Lanti
as The Queen

Warner Oland
as The Archduke

Martha Franklin
as The Duenna

Juliette Berlanger
as The Dancer

Roy Coulson
as Her Admirer

Enrique Acosta
as Ramon
View All

[Hersholt's] role isn't as strong as the one he had in Greed, but it shows him capable of intense characterization that registers heavily.

Don Q is probably the surest-fire of all the Fairbanks pictures. It has all the stuff of which box-office knock-outs are made -- thrills, romance and speed -- and yet it never yields for an instant to the dark forces of hokum.

This plot simply exists to create difficulties for the athletic Fairbanks to overcome... His movements are almost poetically graceful, and what is more they are infused with a light spirit of comedy.