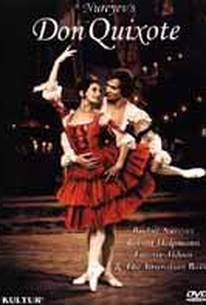 World-renowned dancer Rudolf Nureyev co-directed, starred in and restaged this version of Marius Petipa's comic ballet. The light-hearted story, which is only loosely based on Cervantes' classic, concerns Basilio and Kitri, two young lovers who long to wed. Her father, however, is opposed to the match -- he would rather she marry the wealthy Gamache. But the clever Basilio, assisted by his friends Don Quixote and Sancho Panza, devises a sneaky plan to make sure he gets his bride.

There are no critic reviews yet for Don Quixote. Keep checking Rotten Tomatoes for updates!

There are no featured reviews for Don Quixote at this time.