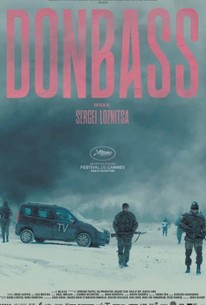 In the Donbass region of Eastern Ukraine, mid-2010s: a hybrid war takes place, involving an open armed conflict alongside killings and robberies on a mass scale perpetrated by Russian-separatist gangs. In the Donbass, war is called peace, propaganda is uttered as truth, and hatred is declared to be love. Life is suffused with fear and suspicion. What is real and what is fake news? Called "a darkly satirical omnibus of scathing vignettes" by the Washington Post, DONBASS serves as a crucial interpretation of the Russo-Ukrainian war, but the film is not, ultimately, a tale of one region or one conflict. It is about a world lost in post-truth and fake identities. It is about each and every one of us.

Donbass is fueled by collisions between the grave and the comic.

It's sometimes confusing and often depressing, but shot through with a grim absurdism.

A very dark comedy that groans under the grim detritus of a still intractable conflict.

The pacing is deliberate but this cool approach serves only to magnify the distressing insights into a dangerous world in which lawless fanatics have assumed control.

Like many right-wing artistic figures from the region, [Loznitsa] thoroughly and unquestioningly identifies Stalinism and its crimes with socialism.

What may surprise is how relatable the film is to our own situation, with its subplots of conspiracy, "anti-fascists," fake news, event actors and utterly malleable conceptions of reality.

There's a clear argument in Donbass about the corrupting power of misinformation and propaganda that could not be more timely.

Although at times the characters only serve to balance the exposition, it's still a devastating film about a morally run over society. [Full review in Spanish]

[Stretches] the most ridiculous aspects of each scene until exhaustion. [Full review in Spanish]

[Donbass] is an angry film casting a light on 'Europe's forgotten war' - a war with more than 10,000 casualties so far.

There are no featured reviews for Donbass at this time.