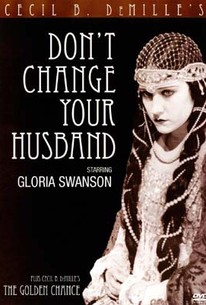 This was Gloria Swanson's first film for director Cecil B. DeMille and it went a long way in establishing her as a star. Considered deliciously racy in its day, Don't Change Your Husband is an amusing battle between the sexes that takes place in the sumptuous upper-class society of the post-WWI era. The romantic Leila Porter (Gloria Swanson) is frustrated by her neglectful husband, James (Elliot Dexter). James is a glue magnate who is more concerned with making money than he is about keeping Leila happy. So she divorces him and marries the flashy, stylish Schuyler Van Sutphen (Lew Cody). It doesn't take long before Leila discovers that Sutphen is a gambling, two-timing rat, and she returns to the more prosaic Porter, who -- luckily for Leila -- is happy to have her back. This is a classic example of DeMille's drawing-room side, and the combination of humor, luscious sets and costumes, and brilliant casting (especially of Swanson and Cody), made this film a solid winner.

Theodore Roberts
as The Bishop

I find the way it deals with adultery and marital dilemmas surprising and hilarious, with two quite enjoyable performances from Elliott Dexter and Gloria Swanson. [Full review in Spanish]

There are no featured reviews for Don't Change Your Husband at this time.