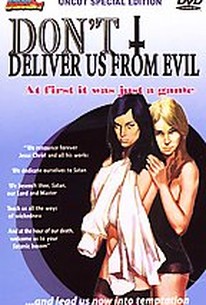 Don't Deliver Us from Evil Photos

Two young French schoolgirls, bored and left too much by themselves, decide to dedicate themselves to doing evil after reading works by French revolutionaries and anti-social types (Baudelaire and Jean-Jacques Rousseau come to mind). The leader of the two instigates a number of small crimes such as torturing a cat, and tormenting the school groundskeeper by killing birds. After they eventually move on to grander things -- a black mass and murder -- they find themselves under suspicion by the police. During a school review, in their final act of self-destructive violence, the two recite nonsense verse, douse themselves in gasoline and set themselves on fire. This film was firmly censored by French authorities, but it was allowed to be seen at the 1971 Cannes Film Festival. ~ Clarke Fountain, Rovi

Critic Reviews for Don't Deliver Us from Evil

There are no critic reviews yet for Don't Deliver Us from Evil. Keep checking Rotten Tomatoes for updates!

Audience Reviews for Don't Deliver Us from Evil

ahahahahaha. one of the few films to ever be banned in france is still shocking today. tho the girls appear to be 14-15 they were both adults at time of filming. a couple of near rapes and several animal cruelty scenes are very disturbing. not to even mention the ending....

Yes it's randy and a little shocking, but the overall feel of the film is so blasphemous that it's not at all surprising how controversial it is. Also, what a kick ass ending! From what I understand this is based on the same case as Peter Jackson's Heavenly Creatures and works as a worthy, sleazier companion piece.

Don't Deliver Us from Evil Quotes